So I've decided I think I'm a pretty good mom.

This was brought into question recently, when I was informed (by someone whose opinion I generally trust, even though he isn't exactly an expert in this particular area) that I pay too much attention to Willow, that I overstimulate and exhaust her, that I am a helicopter parent, and that she will turn out terribly unless I let her spend most of her time staring at the ceiling while I do something else. 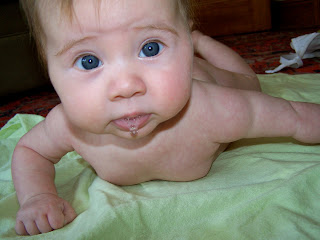 I have concluded that this is a load of hooey.  I really did genuinely buy into it for a bit there, and while I didn't do anything differently (because I love holding her, and because I love playing with her, and she cried when I didn't do these things) I felt really badly about my mothering.  I'm over it.  Remember how I used to complain about how Willow's very existence seemed to distress her, and she was always either crying or sleeping, and everything was terrible and hard?  Those days are over.  This is one happy baby.  She'll smile when she sees me, she'll smile when I kiss her, she'll laugh when I tickle her, and she'll dance when I sing to her.  These are not the signs of overstimulation/exhaustion/spoiledness.  I'm a pretty good mom. 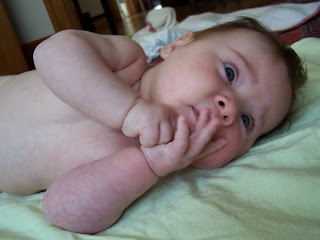 But there are some things I have failed at.  This child will not take a bottle.  Because of the terrors of nipple confusion, I refused to even try her on a bottle for the first month, and then the second month slid by without our trying because, well, it was just one more thing to worry about rather than something that would be helpful.  But my niece Francie's bottle-drinking inspired me, as did the thought of Dave taking a night shift here and there (oh, bliss...) and we gave it a try.  I pumped--not the easiest task in the world, mind you, because although I seem to have plenty of milk, the pump wasn't getting much, and then I was completely screwed up for Willow's next feeding, so she didn't get as much as she would have liked.  And then she refused the bottle.  Dave gave it the hard sell, but to no avail.  Willow's feelings about the bottle were such that the neighbors must have thought we were introducing her to some medieval torture device.

And so we ended up throwing out the hard-won breastmilk.  A few weeks later, same thing.  And I know we should try again, because she's not going to magically take a bottle without us trying it, and really, we didn't try very hard, now did we?  But I hate pumping, I really hate throwing out the milk I've pumped, and despite Dave's gentle suggestion, I don't want to try formula, because breastmilk!  It's the bomb!  Everybody says so!  And look, I have some right here, and it's free, and I like breastfeeding.  I like it less in the middle of the night, sure, but what if she learns to take the bottle/formula and then she only wants that?  I did that to my mother.  I'm not taking that risk.

So mark that off as Not Done. 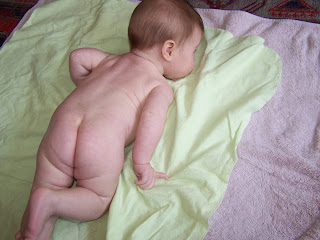 There's also Managing to Have a Life while Having a Baby.  I have not been terribly successful at that.  We now have our evenings back; Willow goes to bed at 8pm, if she makes it that late (if she misses her late afternoon nap, she's down by 7, because she just can't make it any longer).  But RockNoodle and Toaster and Dave and I can now watch a movie in the evenings, or play a game, or read books, all four of us together.  And Dave and I can watch Treme (or rather, Dave can watch Treme and I can fall asleep and have to watch it later) and have a nice late dinner where Dave doesn't have to cut my food up for me because I can't hold a knife and a baby at the same time.

But you'll note that the blog posts are less than frequent.  The breakfast dishes are often still unwashed at the end of the day.  Dave and I went to a friend's art opening last night, and paid for it dearly when we got home at--gasp!--8:15, and Willow was beside herself.

Willow still won't nap unless she is being held, which severely limits my ability to do anything during the day.  I can get her to sleep with a walk in the stroller, usually, but I have to be walking all that time, because she usually wakes up again as soon as we get home.  So apart from a little gentle exercise, not really getting anything done there, either.  I could try doing some stuff while she's awake, but she's only good for about ten minutes entertaining herself before she'd like me to be back to focusing on her, please.

Obviously, this is less than good, and there needs to be some balance between the lying on the floor all day and the being held all day, and I keep meaning to work on it with her, but the problem is I just don't want to.  Would I really rather be doing the dishes than playing with my baby?  Um, not so much. I'd be willing to do them if she were asleep/happily occupied with something or other, but not if she's sad and lonely.  That's just not worth it to me.

These things will need to be fixed--she will need to take a bottle at some point, and she will need to learn to nap on her own, and she will need to manage to enjoy some alone time.  The time will come when these things are necessary, but that time isn't now.  I'm happy enough with the status quo.  I'm tired, but it works for me, and it certainly works for Willow.  We'll go through that struggle when we have to, but in the meantime, I get to hold her and play with her and love her and feel virtuous about it all at the same time. 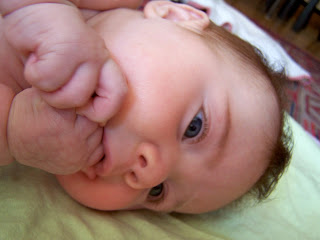 She'll learn to nap on her own just as she learned to go down for the night. Love, Mom

I think you're an amazing mom. I can tell. P wouldn't take a bottle either. Not a one. Not ever. On the other hand, she went right from boob to cup, which was an easy transition because cups come in fun colors and have handles and stuff, and boobs, while endlessly fascinating to men, are pretty boring to toddlers who've been staring at the same ones for a good long time. :)

Did you know you can freeze breatmilk? It keeps great in those little bags for a few months. My daughter did not take a bottle from me, and when I had to leave to get a sanity break, hubby would give her a bottle, and she'd take it eventually when she was really hungry. Not the best, but I would've gone nuts otherwise. Youngest never, ever took a bottle, and I breastfed him for over a year. Oh yeah, and oldest quit on his own at 6 months, so he had to have formula, even though I hated the idea. He had to eat. All this just to say that all kids are different, they don't come with an instruction manual, and you have to do what works for you and the child. You'll figure it out as she gets older, but right now, she needs all the love and hugs you can give her. You'll know when she has too much stimulation. Keep up the good work.

I could have written that post myself, and agree with you 100%. I figure our jobs right now are to look after our babies, not do the washing up!

Also, don't worry about the bottle. I go to a 'breast feeding support group' and all the mums are having the same problem with the bottle. Many of them have been expressing since early on, but after the magic 3 month mark, they all start to hate the bottle.

I'm very half-hearted about expressing now, after seeing so much go down the drain after being refused, and agree with you about formula, I've been resisting it too!! Anyway, I'm sure they'll take the bottle at some stage!

PS - and as I was reading that, I pumped a whole bunch of milk right onto the crotch of my pants somehow. Oh, the indignity.

ha. i love your 'mark that off as not done'. i just did the same with some babysocks. i'm officially retiring myself as a sockknitter: they are a pain in the wa-hoo.... ((do you knit socks??))

Don't worry - let the dishes sit until the end of the day, fold the laundry another time, and play with and hold your baby when she wants you to! Soon enough (certainly within 6 months or so) she will be on the go all.the.time. These days I feel lucky for the brief moments when my son wants me to hold him close, read to him, sing to him...the rest of the time he wants to be on his own, exploring the world.

For whatever it's worth, I think you're a wonderful mother. I don't think it's possible to hold a baby too much, or pay too much attention to her. As other folks have pointed out, as they grow, they become more independent and the need to be held lessens quite a bit. I believe that responding to their needs and wants at this age just makes them secure and happy. You're doing great, and clearly, so is Willow.

Hi! Just showed up on your blog from Ravelry :)
It sounds like you are doing a wonderful job being a mother and listening to your instincts. I was wondering if you have tried wearing your sweet girl in a baby carrier or wrap? It might allow you to get something done while she naps (if you want to, of course). A moby wrap, or beco would probably work great at her age. Hugs to you, from a fellow mama with a toddler and a 2 month old.

You could try a sippy cup, too. Mine refused any sort of nipple that wasn't my own, but drank from a regular cup just fine (slightly messy when they start to want to do it themselves), and a sippy cup shortly after that. Now, at 9 months, she drinks like a pro all by herself from either!