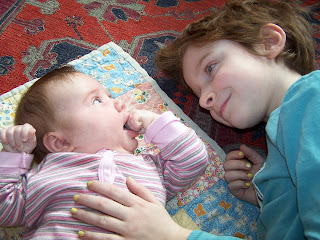 I'd hate to give anyone the impression that RockNoodle and Willow never get along, although we do tend to document the times when things are cheery so we can pull them up for RockNoodle and say "See?  See?  It's all good!"

There was a story I read as a kid, about Frog and Toad I think, and Frog (or was it Toad?) had a garden and he loved it so very much that he watered it every day and he sang to his seeds and he fed them fertilizer and eventually he crouched down on the ground and screamed at the flowers to grow, damn you!  Only not in those exact words since it was a kid's book. 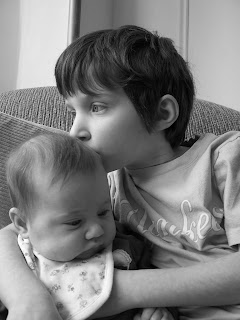 I think the flowers did eventually grow, and these here metaphorical flowers are growing just fine, though not at quite the pace RockNoodle/Frog or perhaps Toad would like.  If we suggest that RockNoodle scrunch a scrunchy toy for Willow, she will scrunch it will all her might and desire to please and it will be frenetically scrunched and Willow will cry.

But that's lessened, actually.  RockNoodle is extremely sensitive and solicitous and is starting to recognize what Willow responds to, and what she doesn't.  It's fun to watch.

And in an almost-but-not-quite non sequitur, I present for your enjoyment Willow in her previously blogged Little Sister's Dress: 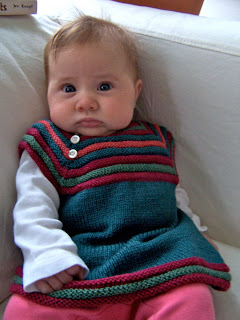 It's still kinda big, but it fits her well enough, and will fit for some time to come, which is a relief, since I'm going through her clothes and pulling out thing after thing that no longer fits (mostly pants.  She has only two pairs of pants that actually fit.  The others are too big or too small.  We're going with too big as of now, since falling off is better than no circulation, right?)
Posted by Nikki Van De Car

I think this picture (the one in her knitted top and pink pants) is probably my absolute favorite picture of her so far. She has that unique expression she always makes, like she is thinking things over. Makes a doting grandma gush.

Hi! Your dress is so cute, as well as your beautiful baby girl!!!!!
Where on earth did you find that adorable pattern? I love it!
And as far as a helicopter Mom.... they are the best! You are doing everything right. Love, hold, kiss, hug your beautiful baby as much & as often as you can.
Your insticts are the right choices for you, you are a great Mom!
Bonnie
bonnieboo_13@yahoo.com