Willow was born with a pretty bad case of cradle cap.

I think she's so absurdly beautiful that any slight marring of the beauty strikes me as completely unacceptable--I'm quick to clean up earwax, clean out the lint from between the fingers, wipe the sleep from her eyes, pick her nose, etc.  And cradle cap certainly is the worst of the lot (she never got baby acne.  A tiny breakout here and there, but nothing that stuck).  But having read over and over again that the best thing to do for cradle cap is to leave it alone, that's what I did.  And I'm quite proud of myself for that.

And then I fell off the wagon.

In my own defense, I did ask her doctor about it.  It's been four months after all, and how long is cradle cap supposed to last, anyway?  The doctor said that if I want to help usher things along, I should smear Vaseline over her scalp, and then scrape off the scales.

Ewww.  I decided I would not do that.  But then, the next day, I put a tiny bit of Vaseline on a small section of her scalp, just to see what would happen.  And it scraped off easily!  It was even kind of fun, in a gross way.  We sat on the porch and she watched the cars go by, and I scraped off a centimeter-by-centimeter square of cradle cap.  And I went inside triumphant and determined to do the entire scalp the next day.

Fastforward.  I smeared Vaseline all over her head, and immediately realized that there is a vast difference between a small section of Vaseline and a whole head of it.  I couldn't put her down.  I couldn't do anything with her.  Vaseline got all over my clothes and all over her.  And then I got to scraping.

Again, vaaaaaast difference between small section and entire head of baby.  Icky, gooey globs of dead skin stuck under my fingernails and were wiped on a towel, which was bad enough, but the worst part was that I couldn't even get most of the globs off of her--they were stuck in her hair, stuck on her scalp, and her head had never seemed larger.  The process took hours, because while it didn't appear to be hurting Willow, she didn't exactly love having me scratching away at her head and tugging bits of goo out of her hair.

Finally I just gave up.  This would have to do.  I couldn't take it any longer, I had to get that baby's head clean and free of gunk.  I plopped her in the bath, rubbed shampoo into her hair, and....the stuff didn't come out.  Not only was her hair still all vaseline-y, but there were still lumps of cradle cap stuck in it.

I dried her off and tried to wipe out the Vaseline.  Here is the result: 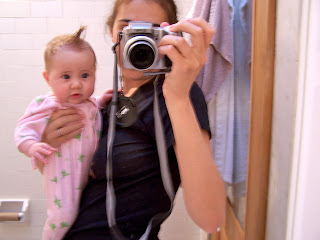 Apparently Vaseline is good for things besides making toast.  And it's much cheaper than fancy hair gel.

Here is the next morning: 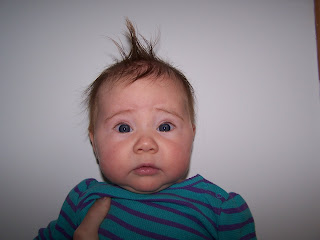 It took a while.  Her hair is now back to normal.  Her cradle cap is mostly gone.  And her mug shots are cuter than all the other criminals' mug shots.
Posted by Nikki Van De Car

My wee ones always get major cradle cap no matter what I do. With DD it spread to her eyebrows (!) so in despair I applied a bit of Lansinoh, and rubbed it off with a dry muslin, which actually worked! But her head is currently still a bit crusty as I'm persevering with special cradle cap shampoo. Not as effective, but not so messy (though no cute mugshots, either!).

Hilarious! The nurse at the health unit told me to use Dial Anti-Bacterial Soap.

Oh my god, that's hilarious. I love her mug shots.

Oh my god, that is hilarious. I love her mug shots.

My kids used to get cradle cap and even now at age 7 & 9 they get it once in a while. I do the olive oil thing, it works.