It's been a busy couple of weeks, I tell you. 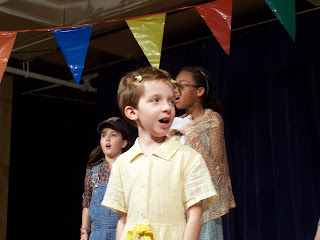 The kids both do musical theater, and we had two plays on consecutive weekends.  The cuteness factor in Charlotte's Web made up for some weird and not very good music: 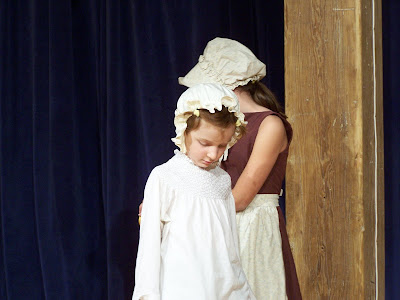 I mean, seriously.  The bonnet kills me.  RockNoodle was a little lamb, and frankly had the best lines in the show.

And on the other end of the spectrum, we had Toaster's show: 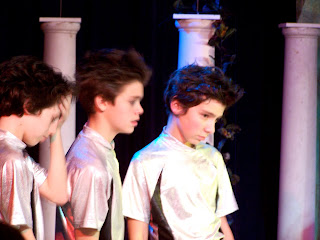 Anybody heard of Starmites?  Yeah, Toaster is a Starmite.  They have cool hair.  And shiny shirts.  And have to defend themselves against a guitar called "The Cruelty" that inflicts pain.

I'm so not kidding.  It's was so insane, it was great.  Dave and I were, shall we say, a little trepidatious?  Toaster didn't tell us anything about the show, and we hadn't heard any music, nothing.  Needless to say, this is the first production Toaster has been in where I didn't get all choked up watching him, since it's hard to get all weepy when you've got Toaster consulting The Book of Twitter on his iPod, searching for ways to battle the evil Shak Gra.  And frankly, it made for a nice change.  Usually my eyes are as blurry as the above photo (for which I apologize.  It's hard when they're moving around and you can't use a flash).
Posted by Nikki Van De Car

well when the kids are interested in Art. visit site Help create a fairy tale for children