Things I Do When I'm Not Staring At The Baby

Well, there aren't many of them.  Between the changing/feeding/holding/comforting/wondering what on earth is wrong of the baby, I don't have time for much.

But I have managed to knit a few rows: 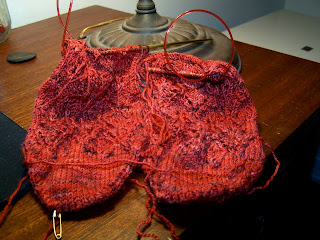 Interlocking Leaves by Kelly Porpiglia, in Sweet Georgia Sock, colorway Slayer.  (I know.  What on earth am I doing knitting yarn called "Slayer" into some non-vampire pattern?  It's not like there aren't plenty of vampire socks to choose from!  But to be perfectly honest, I love the idea of them usually, not the pattern so very much, and...yeah.  I am a betrayer of the sisterhood.)

I haven't knit all that since Willow was born.  In fact, I think I've knit about six rounds since Willow was born (and hey, go me!  Six rounds is a lot!).  I started these when I was thinking about what to pack for the hospital, and clearly I would need knitting, and wouldn't it be neat to knit myself something that I could wear and always remember as the thing I worked on while in labor?

Except it didn't really go that way.  I neglected to take into account the IV, and a catheter in your hand makes dextrous work unpleasant, if not impossible.  So I did no knitting.  At all.  So sad.

More often, when I'm not looking at Willow, I'm looking at the computer screen.  Staring at pictures of Willow.  (Not really.)  (But almost, because dude, seriously.  Those bath pictures are out of control.)

Like The Wire, it's one of those shows that we've been ordered by people we trust completely to watch, and we've completely ignored them for stupid reasons like "we don't like football."

And we don't like football.  But it totally doesn't matter.  That is one great freaking show.  (So says the latecomer.  "Duh" says everybody else).

It's funny, it's smart, it's touching, it's well-acted, it's sappy in a really really good way, and I'm completely addicted.  We started off renting discs on netflix, but then discovered that just couldn't satisfy our cravings fast enough so we...stream them from netflix.  We finished the first season in about a week.  It's a little embarrassing (but hey, we're tired, and our brains don't work all that great.  We tried playing Scrabble one time, and it was just pathetic).

Let me put it this way: I suggested to Dave that we spend some time on Sunday watching football.  Because though it is actually a rather minor part of the show, I want to understand what's happening when Matt Saracen comes up with a play and Coach says okay and then something happens and it's really good apparently but I don't know why because I don't understand football.
Posted by Nikki Van De Car

Our children sound very similar, which kinda makes sense. Perhaps they can bond over basket hatred and pro-chest leanings in February, which can't come soon enough!

I avoided Friday Night Lights for the exact same reason. It's good to give in sometimes, I guess.