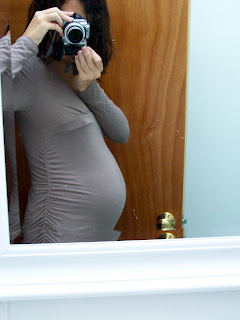 I could perhaps have brushed my hair before taking this picture, but I didn't. Instead, I kind of look like Wall-E with a messy wig on. And pregnant.

I feel utterly enormous now, and have a nearly impossible time getting up out of a chair, not to mention out of bed, and I know it's only going to get worse.

On the other hand, and I say this as someone who seems to still be on the other side of the Age of Vomiting, there are some unanticipated benefits to being very pregnant:

1. It's really hard to do the dishes. You just can't reach. Other people have to do them for you. There is simply nothing else to be done.

2. It's really easy to clean out your belly button.

3. It's actually become easier to sleep on my side now that there's this giant thing that requires a ton of effort to move.

4. Fedex guys will carry the big boxes into your house for you. (It's possible they do this anyway; I don't have a lot of experience with receiving big boxes).

In other news, Halloween around here was a load o' hogwash. The kids were trick or treating with their mom, and their costumes (which we had them in the night before) were suitably weird:

RockNoodle isn't asleep, she's making an angry face, for she is a Cheerless Leader. Get it? Not quite as cool as last year's Ziggy Stardust, but then nothing could be.

For those like me that need to be told, Toaster is PeeWee Herman. In as significant a sign of the passing of time as I can think of, he's wearing a costume that his father wore when Toaster was three (four?) and scared the living daylights out of him. And here he is, conquering his fears and his father's lack of height, as this fits him perfectly.

So the costumes were cool. And I hear tell trick or treating was as well. But here at our house, it was lame beyond belief. Dave had bought enough candy to last us, in our old neighborhood, about an hour. Tops. Early on, we set aside some candy for ourselves, because we were sure to be depleted without much warning.

And then we waited for the trick or treaters to emerge. And waited.

We're still waiting. We got all of four sets of visitors, and were practically shoveling candy at them, and are still left with a ten pound bag of candy.

And I'm home, alone, all day, with that bag of candy. You should expect the Twix bars to disappear first.
Posted by Nikki Van De Car

1. You look adorable. You may feel huge, but you're not. You're the kind of pregnant lady all the other pregnant ladies hate.

2. The kids look awesome, too.

4. FedEx guys (and UPS guys, and USPS guys) NEVER bring the boxes inside the house. You are officially getting the royal preggie treatment.

5. Will you hurry up and finish gestating so I can see a photo of this little ball of cuteness? God! I mean, what is taking so long?!