A post that is about knitting! As opposed to vomiting! How refreshing! 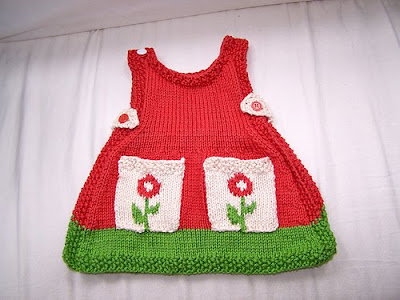 You know how there are some patterns you see when you're first starting out as a knitter, and you think Good Golly, how will I ever get good enough to knit that? Well, Anouk was one of those for me. Intarsia is scary. I had barely managed to incorporate stripes at that point.

Evidence of pregnant stupidity is less than satisfying. 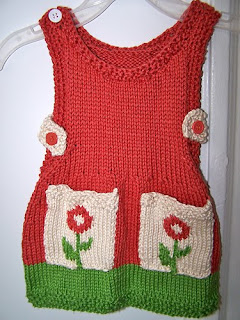 On the other hand, the knit itself is satisfying enough.

It is cute enough that I could just about die. And I discovered I like intarsia, although there is one slight thing I tend to screw up, and wouldn't mind having somebody explain to me how to prevent it--why do some of my stitches in one color end up absurdly loose, no matter how much I tug at the yarn to try and keep my tension even? What does one do about this? Besides what I did, which was just use a yarn end on the other side to try and pull it tight and hide it. I doubt that's the approved and professional method.

The whole thing took hardly three days to knit (it's teeny) and my, I do like Shine Worsted. It doesn't have great yardage, but it's strong and shiny-without-being-too-shiny and supple and very soft.

I knit the pattern as written. I saw a lot of displeasure in the unsewn-sides on Ravelry, but I can see how it would make the dress easier to grow with, and I thought I'd at least try it out on Roo before sewing the sides up, especially as I've now discovered I have enough yarn to do so. I did have the same trouble with the shoulder instructions that others complained of--they didn't quite make sense to my brain, so I just did what I felt like, and it worked out okay.
Posted by Nikki Van De Car

Adorable! Two (or three!) color knitting has always scared me. I couldn't even bring myself to do a row of one color and then a row of another color without involving scissors and knots. *shudder*

Well, I had two dye lots of blue for my sweater I just finished. (Squee! First one!) And it was be a shade-lighter dork or come to terms with alternating balls of yarn every row.

And I liked it. It felt dangerous!