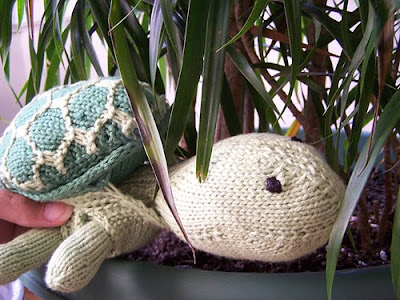 Sheldon spent some time this weekend roaming about the house, acquainting himself with all its parts. 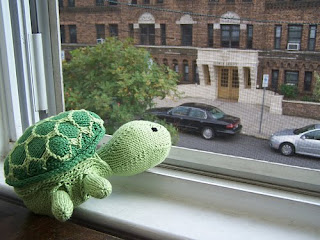 He finds the world outside intimidating. He is not, however, intimidated by cats. 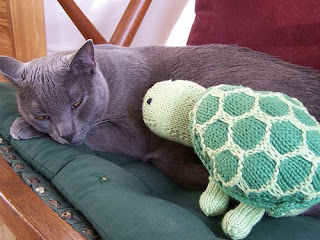 Though perhaps he should be. 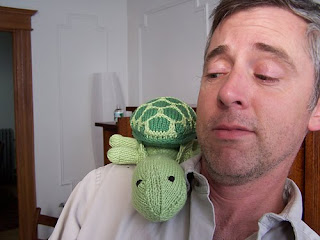 Sheldon has an odd habit of sneaking up on people's shoulders, and this can be distressing to them. He doesn't mean any harm by it, though.

Sheldon requested that I not post a photo of him without his shell, as that is turtle pornography, and I have respected his wishes. For now anyway.

Sheldon by Ruth Homrighaus was not that much fun to knit (previously mentioned stupid use of too-short circular needles being the likely cause, along with four legs being too many legs for my taste, though not for Sheldon's, he notes indignantly). But he is a lot of fun to play with.
Posted by Nikki Van De Car

That's one of the cutest damn things I've ever seen.

adorable! thanks for always sharing links to the patterns you write about!

that's awesome! and i love the photo of Sheldon with Dave!!!