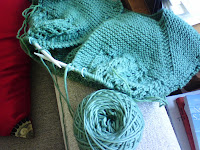 In an accidental attempt to be matchy with my baby's blanket, I'm knitting February Lady Sweater in a similar color.


This is a very pleasant knit, except for how it's producing constant anxiety.

See, I don't have enough yarn. I have only three skeins of Malabrigo Worsted (in mint) and nowhere on Ravelry has anyone managed to knit this sweater with anything less than incredibly short sleeves with only three skeins.

I'm trying to expand my gauge by using size 10 needles rather than the US8 called for, which seems very tight for Malabrigo anyway. And I'm fussing around with the sizing, pretending I'm a size 33 bust, which is just ridiculous at this point (the size 10 needles will cover the difference, right?)

Speaking of tenterhooks, we find out the sex of the baby tomorrow. I'm very pleased--finally, more information! Various people have their various fingers crossed for various things; I just want to know one way or another. Plus, it marks the halfway point, which is reason enough to celebrate. So, you know, drop by tomorrow if you want to be surprised now, and cover your eyes with your fingers if you want to be surprised later.

To be continued....
Posted by Nikki Van De Car