What To Expect tells me I am officially in the second trimester now. If only my body believed it.

BUT! I'm a firm believer in the power of positive thinking (and so I tell my bladder that I JUST PEED, and cannot possibly have to pee again, and to therefore shut up), and so onward we go. 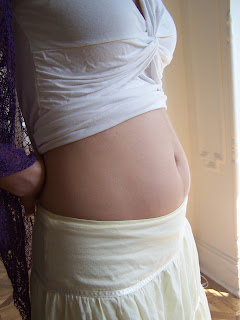 This is actually a couple of weeks old, but nothing looks any different.

So, I can tell, but I doubt anyone else can, or else they think I just ate a whole lot of potato chips or something. But let me tell you, my pants can tell. Yessir. I have put on no weight whatsoever (though not for lack of snacking, let me tell you), but I don't fit my clothes. This is confusing. I packed away all the pants I can't wear now (since it's supremely unlikely I'll be able to wear them anytime in the near future) and cut the elastic off the tops of my leggings (they still stay up, only now they don't make me feel like I'm being cut in half).

That last I tested out last night, and gave it the double dose of a very big dinner to really push the limits. Yesterday was Dave's birthday--and, as I'm sure many of you noticed, Father's Day as well.

For sure, this could be considered quite the bummer, along the lines of a certain baby who is as yet nameless but due on Christmas Day, in that Dave normally has two days of everybody being nice to him, but this year only had one. But then again, the kids were mindful of this double whammy of a weekend, and so were delightful little angels who were nice to each other the whole time which is practically unheard of round these parts, so really, perhaps Dave got the better deal.

In any case, following apple galette for breakfast, which the kids and I made, and didn't in fact take half the day like last year, and though things got a little dicey for me at the end there (pregnant women really must eat before doing anything else, note to self), it was delicious and decadent. We hung out for a while, and then Father's Day was declared over and grown-up birthday began. We dropped the kids off at their mom's, and headed into the city to go see a PG-13 movie and walk in the rain up to the West Village to eat some delicious scallops and Old Bay fries at Market Table.

And my leggings didn't fall down not even once. And I didn't throw up either, except for a little bit in my mouth as I was getting ready for bed.

And neither of those things happened to Dave either. Good birthday.
Posted by Nikki Van De Car

Wow. I can't believe mine is 12 and even makes her own PB&J for lunch!

There is so much fun ahead of you! Enoy!

Wow! I sure am using a lot of exclamation points today!