Three O'Clock and All is Not Well

We are a mess.

I had a mild stomach thing happening last week--nothing erupting, per se, but just feeling crappy and vomitous. I stayed home Thursday, and struggled through Friday. Friday night, the children returned from a vacation to Disney World with their mom--they were full of stories and demands that I examine and admire their pin collections (not sure what that was about. I heard more about the pins than the rides).

They're both pretty tired from their trip, and go to bed early. Only RockNoodle doesn't quite make it--she throws up.

Dave and I figure--okay. No big deal. We'd heard that Toaster had thrown up the night before from eating pizza, nachos and a giant sundae (pictured). 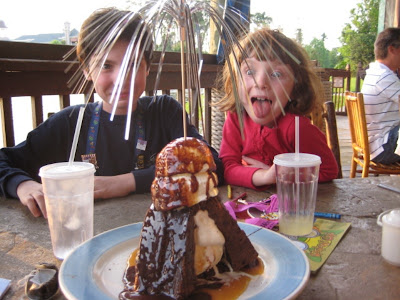 I would have thrown up too. Rocknoodle probably suffered a delayed reaction from a similar thing. We put her to bed next to us in the spare room so she doesn't have to climb down from her bunk bed should another heaving be required, and we go watch The Wire.

I check on her as we're heading to bed--she's unusually restless, but nothing else to report. Then, an hour later, just as Dave and I have dropped off to sleep, she comes into the room.

No. Kidding. There was vomit all over the bed, all in her hair and on her pjs (down to her ankles, by the way, not sure how that could have happened) and smeared all over her face.

The problem, see, is that RockNoodle doesn't throw up like normal people do. Where the rest of us heave and hurt our stomachs and couldn't possibly imagine sleeping through such a thing, she just kind of....burbles. It comes out of her like a very slow volcano.

The choking possibilities of this are obvious.

It being his kid, Dave took over sleeping with her duty, to make sure that her airway stayed clear and her face and hair stayed relatively vomit-free. But they were sleeping right next to me, and the bathroom is right next to my head. So while I only got up to help them a couple more times, I was awake for every episode they experienced.

The next morning into afternoon, rinse repeat, and hose her off again.

That night, instead of putting her in the next room, we put her on the floor of our room. She threw up some more right as we were putting her down. I stayed with her in the room until she fell asleep, unwilling to leave her alone to choke to death. Then we went and watched some more The Wire. (We were so tired at this point that The Wire was all that was keeping us going).

I let myself quietly into the bedroom, and started getting undressed. I was standing in my shirt--no pants, mind you, no pants of any kind--when Mount RockNoodle started up again. I held her still-sleeping head over the bowl--she was so exhausted and weak that she couldn't hold it up herself and kept dropping it down in there--and tried to ease her poor shuddering self off the bed, as I hadn't quite made it in time to keep the throw-up entirely in the bowl.

I got her into the bathroom where Dave found us, and we cleaned her up, cleaned up her bed, and put her back down in it. And then I started sobbing. Dave held me as I cried myself to sleep--I was crazy upset and didn't know how to calm down. While she didn't throw up again that night, I sat bolt upright every time she turned over, sure that if I didn't get to her she would die.

Fastforward through some more days of this--and Dave's own breakdown--and she is now better. Thank God.

And now it's Dave's turn.

The healthy children are staying at their mom's for the duration, which is absolutely for the best but sort of a problem since Dave and I are (theoretically) supposed to be going away next week and won't be seeing them. And the worst of it is that we got another disc of The Wire last night--and it was CRACKED. Unwatchable. What are we going to do? Dave needs something to keep him focused on something other than his stomach. And netflix will never get us a replacement in time.

Dave claims he is able to eat something tonight. I'm going to get him some soup, and I've borrowed a friend's Blockbuster card (so old school) and we'll see what we can do here. We've got a plane to get on and children we'd like to see before we leave.

Why didn't you tell me? I have the entire box set of The Wire and will be happy to loan you any discs, silly. I hope Dave is feeling better. The kids are watching American Idol quite happily.

1. I love that you were Porky Pigging it when called upon to help.

2. Pat used to frequently vomit while sleeping, then continue to sleep next to it (from - what else - eating too much).