The piano got moved today.

I know that it is impossible for that phrase to be written without being immediately followed by a tale of woe, so here goes, but be warned that this tale is only hearsay, as I was not there, but here at work staring at the phone and worrying:

The last time the piano was moved, it was wheeled sedately down the street in mid-April, as it was venturing only eight doors down. This time, it was in for a bit more of a ride.

The piano made it out of our current house easily enough--out the door and down the stairs, as a proper and well-mannered piano should do. But at the new house loomed a crane, for the piano would not fit up the new stairs, but had to be swung in through the second-story window.

As if that weren't problematic enough, the crane couldn't get in there, as a car was parked across the driveway and the double-parking bastard of an owner could not be found. The police were called, to see if the car could be moved. The police got annoyed that a crane was being operated, and demanded to see the permit.

Upon being informed that a permit was required, Dave ran and got one. The crane operator was very upset to be working with such chumps who didn't know to get permits, and who couldn't ensure that cars wouldn't be where cranes needed to be, and who had another job to get to but couldn't because of aforesaid permits and cars and who was going to do something about that?

Dave came back with permit as fast as he could and the car was gone. 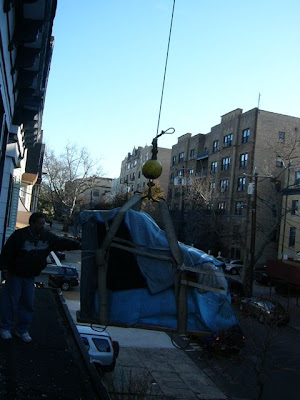 The piano was hoisted.

(The piano, by the way, was wrapped heavily in blankets, but nobody else was and it's nineteen degrees out today).

The piano, with its blankets and wooden slider thingy, barely fit through the window.

Actually, it didn't technically fit through the window. It was the same size as the window. The window got slightly expanded.

The crane operator left in a huff with some extra money in his pocket (borrowed from the folks who currently own the house, which is kinda hilarious), the piano mover guys left, and Dave left, and the piano sits there alone, keeping the house warm for us (though the blankets have been removed).

One move down, one to go.
Posted by Nikki Van De Car

OMG, this sounds amazingly horrible. I'm glad it eventually made it in!

Wow...I worried for you! Your baby grand piano is a beautiful one...I am glad it made it to your home to keep you warm.