It's a canyon on Kauai. It's crazy.

I mean, I've been there a lot, I've hiked Waimea Canyon many many times, but every time I come across it, or, as I'm leaving lush Hanalei, I'm mystified. There's a canyon on Kauai. 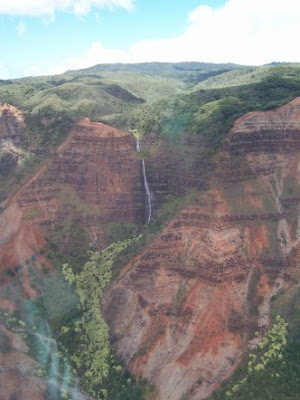 We decided to hike to those falls there--do you see that ridge on the left of the top of the falls? Yeah, you hike along that. And it's as steep as it looks. And the dirt is pretty loose.

It's an easy hike, really, and I've been doing it since I was a kid, but that part always freaked me out, and it freaked Dave out good and plenty. 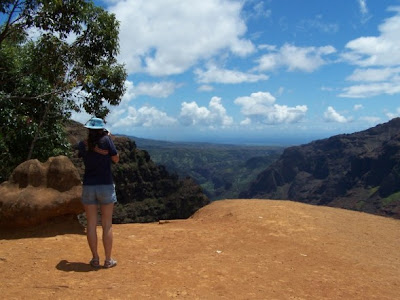 It'd be a long way down.

But it was a beautiful day, as you can see, and it was nice to be active. (Turned out to be our only active day--I'd had all these visions of hiking and walking and exploring--find that waterfall at the back of Hanakapiai! Alakai Swamp! Didn't happen.) 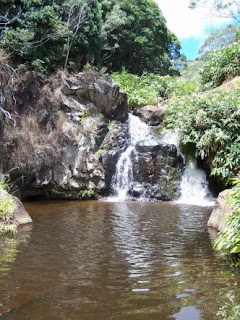 Beautiful falls. Smaller here, obviously, than the above picture, but therefore with a pool and less of a cliff to fall off of. We did a bit of swimming, leptospirosis and Dave's cut leg be damned. It was hot. We're still alive.

And then we went to dinner at Monico's. Again.

So the next day would be Monday (I'm starting to have trouble keeping track.) We went to Lumahai, and were playing around in the water when Dave said "that guy looks like Kenny."

Now, here's the thing about Kenny. Dave is friends with Kenny, I've met him once for five minutes at a Clap Your Hands Say Yeah! concert at South Street Seaport. But I've had irrational affection for him anyway (based mostly, I think, on how he looks like a combination of Wesley from Angel and Desmond from Lost. Also he's a really nice guy.)

It was indeed Kenny. And that was indeed his wife Lisa. Craziness. The craziness is unparalleled. They were leaving that evening, but they'd been at the Farmer's Market the Saturday before, and for all we know, we'd seen them at Lumahai before too. Craz-i-ness.

We had a yummy dinner (by ourselves--we'll have dinner with Kenny and Lisa back home. Not so much fun to dine with other people on your honeymoon/romantic getaway) at Postcards Cafe, where I had pasta (with fish, not to worry. I ate fish every day, I promise) and Dave had a big honking chunk of ahi. It was like a pound of ahi on his plate, plus rice and veggies, all of which were delicious. I know, because I ate some. If he could eat a pound of ahi all by himself, we'd be scared. The amount he ate, however, did go a long way to assuaging the need to eat as much ahi as is humanly possible before flying home.

Tuesday was very exciting. This was the one touristy thing I knew I did want to do--a rafting trip around the Na Pali coast. We knew it would be very splashy, so we wore bathing suits. I mention this for reasons that will be made clear shortly.

They told us to take photos on the way out, as the way back would be way windier and splashier. This is also mentioned for reasons that will be made clear shortly.

But our photos--when we could take them, as the way out was splashy enough--were stunning. 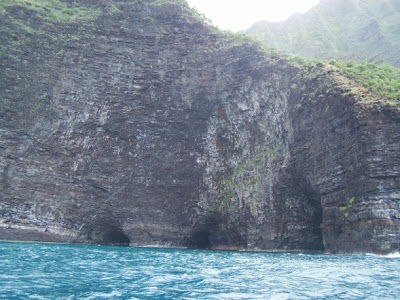 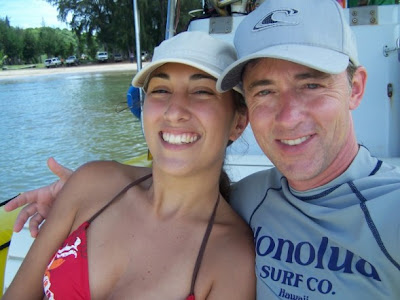 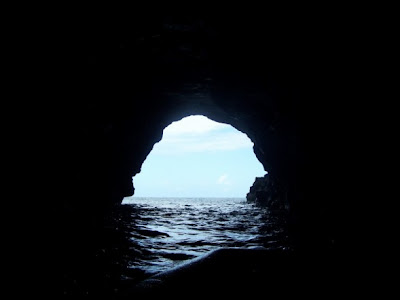 We pulled into sea caves, under waterfalls, saw dolphins--and baby dolphin!--and dropped anchor at one point for some kinda scary snorkeling--the fish were large, and it was clear that they kind of thought we might maybe be food. Pretzels? Humans? All the same.

Okay. So see that suit in the middle photo there? Looks secure enough, right? I've never had problems with it, anyway. Well, it didn't really hold up so well to gale-force winds and rising, dropping, pounding waves.

Why, you ask, didn't I just put on a shirt? I couldn't. I was terrified. I felt that if I let go of my death grip (a death grip that used all the muscles in my body--tense every single muscle you have, including the arches of your feet, and that was me), I would die. That is what a death grip is. So really, I didn't care much that was my suit was flapping to the point where my left breast was exposed for all the world to see. If it was breast or die, I was definitely going with breast. And everybody seemed pretty pleased with my choice.

Aaaaaah. I'm all tense again now. The rafting trip was great, really, so much fun and so much to see, but my God, I'm never going on one of those again.

Wednesday was less fun. We got a cheaper rate on the rafting trip by agreeing to sit through a timeshare presentation. I know lots of people who do this, who say it's great, you sit there for a couple of hours and spazz and then they let you go and well done!

NO. I could not spazz out. I was way too irritated with the pushiness, and the need to clap and say "Aloooohhaa!" louder the second time (not their fault really, that one. It seems to be required. I had to do it all the time when I was a kid. I Do Not Get It.) and that guy's nipples were in the wrong place, I'm telling you they're aliens. Clearly.

Now, we'd been told that The Beach House was the best restaurant on the island, and we needed to go there. It's down in Poipu, which was far, but Dave had been wanting to get some surfing in so we figured we'd recover from the timeshare scariness, surf some, snorkel some, possibly get a drink, and then go for dinner at 8:30, the earliest available reservation.

It didn't exactly work out like that. For one thing, it was hot. Africa hot. For another, I love Brennecke's and Brennecke's may love me, but it does not love Dave. (Nor he it, now). We were out there not even five minutes when a wave slam-boomed him into the sand and, er, smashed his board. It's a little wrinkly and bent now.

Still totally useable! But Dave's feelings were hurt, and there was no more surfing. He didn't even want to go swimming--I snorkeled, and described the incredible unicorn fish, and no. Not having it. Would rather lie down on smoking hot beach, under a towel. So as to be hotter.

Poor Dave. Eventually I dragged him into the water, and he cooled off both mentally and physically. We stayed until sunset, watching the surfers turn more and more into sillhouettes, and then headed off to the Starbucks, being more in need of coffee than beer if we were going to make it dinner.

And Starbucks was great! One thing about our condo that we didn't like--it had no sound system. My sister lent us her iPod radio thingy, which meant we could listen to music in the car, but other that--dead silence. Plus roosters. We are people who like to sit and read and listen to music, but there was none of that. Except at Starbucks. We sat outside on the patio, and listened as song after song of our favorite artists came on--Aimee Mann! Bon Iver! Josh Ritter! Oh how we had missed them!

Okay, so that's not a particularly interesting bit of honeymoon activity, but I just have to try to convey how nice it was sitting outside and listening to good music. Really.

The Beach House was lovely, well worth the wait. My ono was basil-y and sweet and delicious, and Dave's scallops were very tasty indeed. We had our second married martinis, though I drank most of Dave's, as he had the long and harrowing drive home, about which the less said the better. He needs new glasses, stat.

So we had planned on hiking Hanakapiai on Thursday, but, well, I was an aching mess. If you tense up your whole body and then slam it up and down as you would a bag of ice you're trying to break up, you might end up with some sore muscles. A long and relatively difficult hike was not in the cards. Next time. 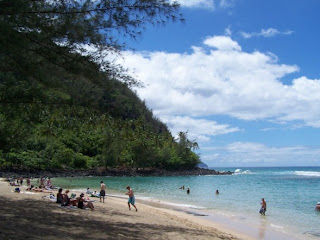 So we
went to Ke'e Beach.


Pretty terrific snorkeling--schools of angelfish and manini, and best of all-- 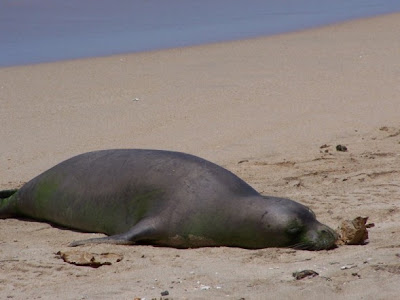 A Hawaiian monk seal sunning himself calmly and happily. They just hang out--people come and stare, and take photos, but (as you can tell from the moss growing on him) they don't seem too bothered, so long as everyone maintains a polite distance. There are dozens of other beaches they could go to, with far less human activity, but they show up at Ke'e and Poipu whenever they feel like a little company, I guess.

We'd been told--somewhat snottily--that the Lumahai we knew and loved was tourist Lumahai, and if we really wanted to go where it was at, we should head to the other Lumahai, with parking and no short hike involved, because "the locals are lazy and don't want to walk." She managed to insult just about everybody. Irritated as we were, we wanted to check it out. 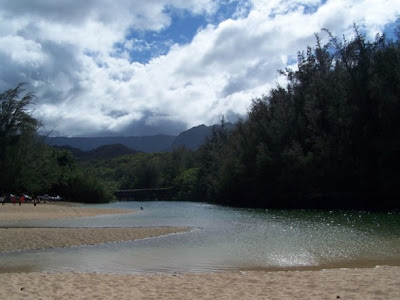 It is lovely. This is the view of the river as it enters the ocean--which it does whenever the tide is high enough or a big enough wave hits. Which is often. Other Lumahai is not exactly what you'd call swim-friendly. Some local kids were surfing--sort of. They were mostly getting bashed against the sand and barely avoiding the rocks. But we sat on the bar between the river and the ocean and watched the waves and admired the view and thought how really, as long as you stay out of the ocean, it was indeed a nice beach.

But not as nice as Regular Lumahai. 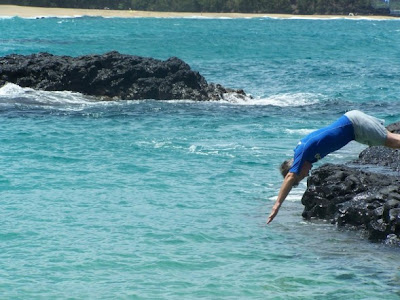 The water looks to be about three feet deep, but it's more like ten--Dave will be fine. It's just that clear. And it's gentle and grand and peaceful. We came back the next morning to say goodbye, as Friday was our last day. We went to Monico's once more, wistfully sipped margaritas at Duke's, drank Firerock Pale Ale at the Honolulu Airport, and did our best to say goodbye to everything.

And, you know, planned when we'd be back.
Posted by Nikki Van De Car