So the party actually went fine, apart from my feet still being sore, and the music sucking despite my best efforts (DJ: Tell me what you want me to play and I'll play it--how about Cher's "Do You Believe In Life After Love?" Nikki: Um, no. Do you have anything more current, and, well -- better?") Everyone seemed to have a great time, despite the enormous crowd. My boss is convinced that the hired bartenders made off with some bottles of vodka, but she is mistaken. The vodka was consumed. Really.

But I have to tell you, I was in need of some seriously restful weekend time. Which I only sort of got.

Saturday was spent with a sickly RockNoodle. She has some kind of bug*, and was grouchy and sore-throaty--and then feverish. And once it became clear to her that we were indeed taking her illness seriously, and not allowing her to go on playdates (Christ. Hate that phrase. But that's what the kids call them. Nobody just goes and plays anymore) she succumbed to feeling sick entirely. And I was grouchy and low blood sugary and Toaster was fixated on me buying shoes for some reason and Dave's back was hurting him again from having to pick up RockNoodle, and we just couldn't manage to get our collective act together. Sheesh.

But Regina, mother of RockNoodle and Toaster, and I had a plan. A plan that I was really looking forward to. We were going to dye some yarn.

For much as I love the simplicity and spontaneity of Kool Aid dyeing, the color choices are somewhat limited. And, well, I had a suspicion that my squirt-and-puddle method of handpainting was perhaps less than skilled.

I abandoned RockNoodle to her father's ministrations, and went down the street to Regina's (though RockNoodle followed shortly.) She, researcher and preparer and dare we say OCD-sufferer extraordinaire, had everything set up perfectly. Regina's all spiffy and takes classes and shit, unlike my slapdash "hey, I wonder if this will work?" attitude. Which, in dyeing, seems to be a recipe for ugly yarn and also death.

So as Regina and I set up the Cochineal dye pot, and started the acid dyes a-stewing, she explained to me the business of mordants and soaking and how challenging natural dyes are and I confess, I need to buy a book. Or at least borrow her book. Cause seriously--I can't even figure out what my stitch count ought to be without Toaster's assistance. I think chemistry might require charts and note-taking. 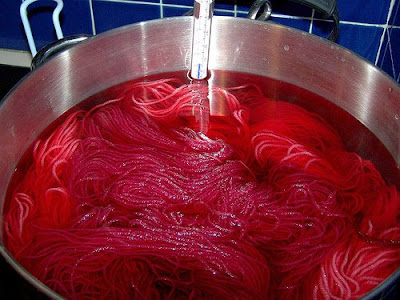 Regina then introduced me to the much more sensible method of handpainting--actually using paintbrushes rather than a turkey baster. Waaaaay less messy. And gorgeous. Here's my skein: 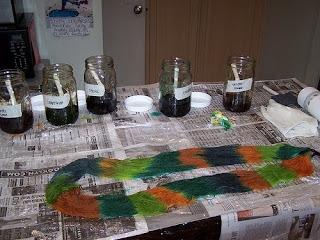 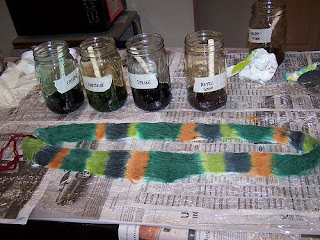 I can't wait to see how these two skeins--exactly alike (this time) in fiber and in color, but dyed ever so slightly differently--will look knit up.

Of course, I'll have to wait, won't I. Regina and I both have long long lines of projects waiting. Sigh. But on Sunday, I did manage to make quite a bit of progress on the Serenity socks--they should be complete within a week, and the pattern--with charts no less!--will be ready shortly thereafter. 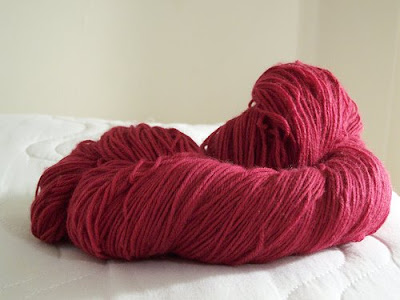 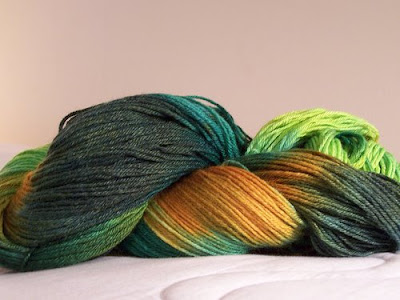 They are both stunning. I'm so proud of them, I can't even tell you. And now I clearly have to go shopping, and buy dyes and mordants and also lots of cling wrap and a steamer, cause I don't have one of those, and paintbrushes, and lots more Bare. 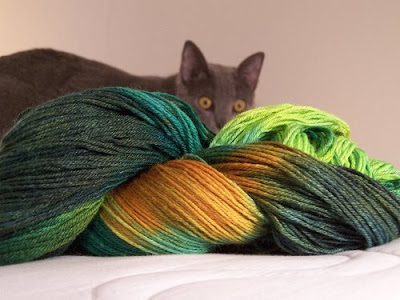 Maud is suspicious of all this. Probably because she senses it means that she will not be allowed to sniff and play with these dyes. Clever kitty.

I had lots of fun doing that with you. We should make a date soon to try out other techniques and other natural dyes. Logwood, anyone?