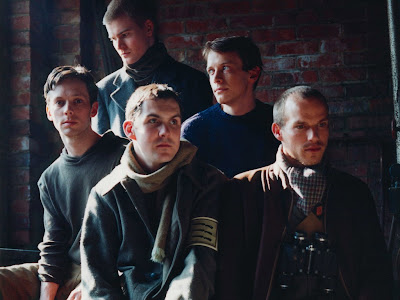 My love for British Sea Power is well-documented. (A fact that was made almost embarrassingly clear at said office office party where everybody kept asking me and Dave how's that band we like, British Air Power?) We see them whenever we can, and yesterday that meant seeing them twice in the space of a week--a first even for us.

As stated, I didn't much enjoy seeing them at the Bowery Ballroom, as certain of their fans seem not to believe in bathing, but very much to believe in the photographs that their iPhones will take if held up in front of my face. And, lest we forget, Dave's back was broken.

Last night we saw them at Maxwell's. We saw them there when they kicked off this tour, and last night they said farewell.

The sound at Maxwell's is never particularly good. (No disrespect intended. Much love for Maxwell's. But, you know, acoustically speaking, it's not great). And it's at its worst when you're standing right at the front, about a foot from the band, between the two speakers. Which is where I like to stand. Dave claims it was unusually deafening last night. I just think it depended on how you angled your head.

BSP was having a grand old time, which was a fun change--lately they've been of the stare off vacantly into space school of performing. They were cracking jokes and making fun of obnoxious audience members and worshiping their rather awesome roadie.

But yes, it was screechy. My ears are a bit fragile today. Dave faded back to where the really high people were, where it wasn't much quieter, but somehow less screechy. After a bit, I followed. There's something about being the swaying chick standing alone and looking adoringly at the stage that I find less than appealing.

We moved back, and the set got rowdy. It seemed to finally hit them that they were leaving. And never to be seen on American soil for an ungodly long time. They stopped playing songs I like, but started playing songs I don't care for with abandon and general crackpotishness. Noble, that large fellow up front, climbed up on the amp, somehow squeezed his tall self between the ceiling and the stack of speakers, and continued to play.

And then he crowdsurfed. Dave and I, being at the back, were in the precarious position of actually being a part of the wave being surfed, as there were fewer people in the back. I'm usually good for helping out with a leg, but somehow, something went awry.

Noble turned in midair, and suddenly he had lost all support. There was just me. We looked at each other with identical expressions of fear--we were both going down.

Dude. I can't hold you. No way no how. But I'll try. I braced myself, and he grabbed onto my shoulders, and I started to buckle.

And then, you know, other folks finally swarmed over. Thank God.

Spirit of St. Louis was appropriately, wonderfully insane--a crackup. And I love love love hearing them play The Great Skua, (though, you know, it's no replacement for Lately), and I sway and close my eyes, and feel transported, and not even remotely self-conscious. 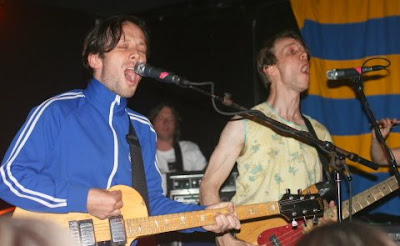 I don't have pictures from the show. I watch the show. I download pictures off the internet, ideally from people who weren't standing near me and bugging me with their picture-taking.
Posted by Nikki Van De Car