But the bugs blocked the view

Dave and I went backpacking for the first time this year.

It began inauspiciously, to say the least.

We went to the Delaware Water Gap, and up the Appalachian Trail to Sunfish Pond. Now, I walk a mile almost every day, and yet it seemed that my hiking muscles had atrophied. One hundred yards up--and I do mean up, as it was entirely uphill--the trail, and I was already tired. Of course, it didn't help that it was 90 degrees, and since it's only April, none of the leaves were out.

90 degrees, and bare trees. Not a pleasant rhyme. 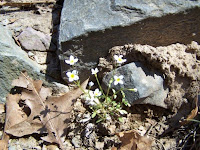 Dave was very supportive and encouraging of my out-of-shape-ness, and only occasionally commented on how it's easier for him because he's "younger than me and all energetic." He insisted on walking behind me so as to let me set the pace, and not push myself to go faster than I wanted to--but then he kept passing me, which was great for my morale, let me tell you. And the trail was peppered with tiny forget-me-nots, growing right in the middle of the path, which provided a sort of adrenaline push, as I attempted not to step on them.

We did finally stumble into the campsite, drop off our stuff, guzzle water, and then--miraculously--continue walking up to Sunfish Pond. 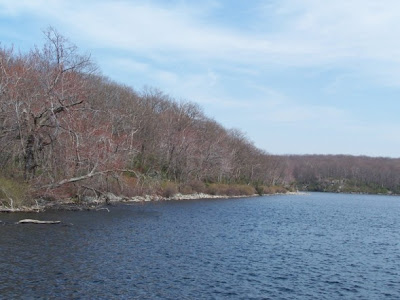 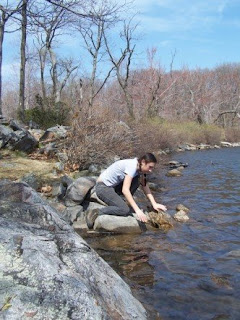 Which was lovely. And amazingly cold. In the heat of the hike, I'd been planning on ignoring all the rules and jumping right in, no spare clothes be damned, but mmmm, no. I felt much cooler just sticking my hands and feet in there. (Not to mention it was like 20 degrees cooler by the water).

Dave and I napped and dangled, but soon came to realize that it was actually more restful at our campsite. All these day-hiking clubs came and gathered round, and the trail goes right by the water all the way round the pond, so there's really no way to sit in serenity and privacy (so good thing I didn't just strip on down, eh?) 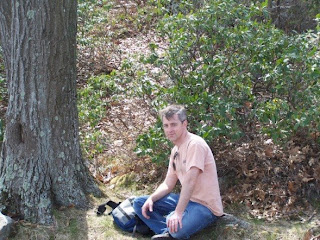 We lazed around in what little shade of skeleton trees we could find. Dave read, I knit, and this was our view: 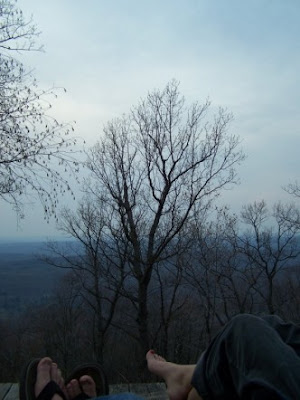 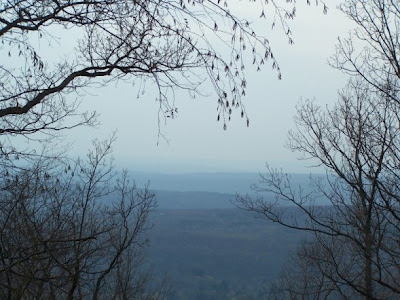 Again, lovely and idyllic, right? The blue hills of Pennsylvania stretching out forever...ahh, nature. But this is what I looked like: 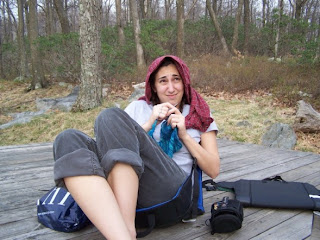 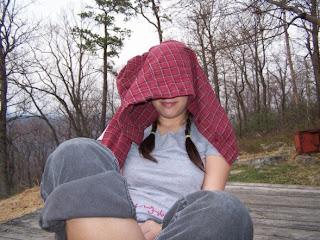 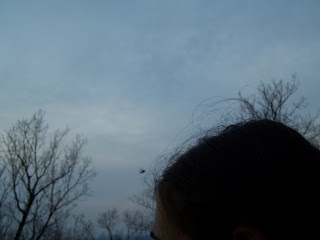 See that bug there? That was the only one that was slow enough to be captured on film. There were about five hundred more swarming around our (though mostly my) heads. Much as we thought it would be too early in the year to have to worry about 90 degree heat, we didn't really consider that the bugs would be out already. So we didn't have bug spray. (Not that it would have done much good against these creatures. They were persistent. When we eventually surrendered and retreated into the tent, they continued dive-bombing the screen doors. I taunted them. Bastards.)

And in any case, we did remember the next best thing to bug spray: 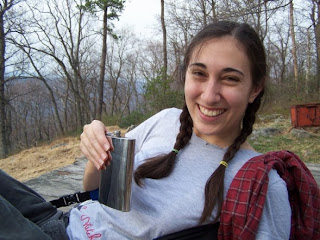 Ahhhh. All better. Thus fortified, we played War (backpacking is not an activity that brings forth strategy and intelligence.). I won. A lot.

We slept (kind of) and packed up as quickly as possible the next morning--the bugs had not faded away in the night, much to my disappointment, and while it was significantly cooler, we had kind of played the scene.

The trip down was absurdly easier. We made it in an hour and a half, and I don't think I even got out of breath. Sigh. Does this mean I need to buy a stairmaster?*

We drove into Stroudsburg, and stopped at the first diner we found. And man, it was old school.
Many of the patrons were chain-smoking. It was gross.

And they had scrapple on the menu, which neither Dave nor I had ever had. And though the scrapple was probably much worse for us than the smoke, it was decidedly tastier. Mmmmm.

Well, you know, we had to earn back those calories we'd just burned off somehow. Can't actually come out on the healthy side of the equation.

I think my heart has just now started beating again.

Just in case your readers aren't clear on scrapple, here's a definition from (where else?) Wikipedia:

Scrapple is a savory mush of pork scraps and trimmings combined with cornmeal and flour, often buckwheat flour. The mush is formed into a loaf, and slices of the scrapple are then fried before serving. Scraps of meat left over from butchering, too small to be used or sold elsewhere, were made into scrapple to avoid waste. Scrapple is best known as a regional food of Delaware, South Jersey, Pennsylvania, and Maryland.

Scrapple is typically cut into quarter-inch slices, and pan-fried until the outsides form a crust. It is sometimes coated with flour or fried in butter or oil. Both in composition, preparation, and taste, scrapple is quite similar to white pudding, which is popular in the British Isles. Scrapple is usually eaten as a breakfast food, and can be served plain or with apple butter, ketchup, pancake syrup, or even mustard and accompanied by eggs.

In some regions, such as New England, scrapple is mixed with scrambled eggs and served with toast. In the Philadelphia area, scrapple is sometimes fried and then mashed with fried eggs, horseradish and ketchup.