Members of My Household

In descending order of age:

Dave. Whom you've met. Older, married before, still rides his childhood skateboard, starts the next week's grocery list as soon as he's finished unpacking this week's groceries, compliments me on the evenness of my stitch when he senses I might be slightly pissed off at him. Believes in the religion of The Rolling Stones, Tom Petty, and Neil Young. Wishes that I let him listen to those last two a little more often. Gets a sweater every Christmas and a pair of socks every Valentine's Day. Photographed me in my wedding dress so I could see the back. We are not a superstitious people.

Me. Whom you've also met. Young, though not quite as young as I look, addicted to Sauvignon Blanc, Thunder Road, the headache that is knitting a Kim Hargreaves pattern, Joss Whedon. Learned to knit while working at a Mom & Pop dry goods store in Minnesota--they had everything Lion Brand and lots of acrylic. I loved them. (I did not love Minnesota). Learned to knit things other than squares when Dave's ex-wife (also a talented knitter) gave me Last Minute Knitted Gifts for Christmas. Everybody got Kim's Hats that year. 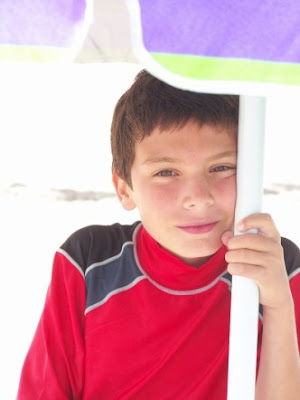 Toaster.* 10 and a half. I am closer to his father's age than to his by one year. And thank goodness for that. When he asked me this morning to define the word "spazz" I said You. (This delighted him). The boy is so interested in everything in the world he can't stay still long enough to finish taking that ice cube he desperately wants out of the ice box because he desperately has to tell you about that episode of Spongebob he saw today, not to mention the Amazing song and dance he learned at theater today you have to hear it, and oooh, what's that you're making for dinner can I help? And can I have an ice cube? It's amazing this picture isn't blurry. I can't decide what to knit him. I've knit him socks, which I've seen him wear once (can't blame him--my first attempt at Figure 8 cast-on, and I did it sideways. And Flickr deleted the only photo. Clearly these socks are ill-fated). I'm waiting for inspiration to hit. Maybe when he's a little older, I'll let him watch Firefly and make him a Jayne hat. He'd dig that. 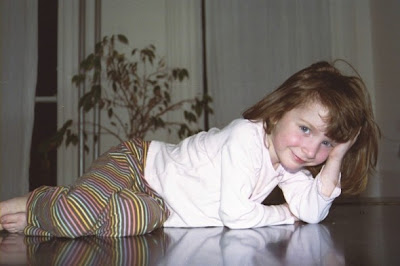 Rocknoodle.* For a bit there, she was considering naming herself "Dish," which I think would've worked quite well, don't you? 6 and a half, small like a peanut, shrieks with laughter at nothing at all, and loves everything mohair. Asked me last night if I would make her mohair socks. Capable of great concentration--will use up an entire roll of scotch tape creating a miniature sleigh or kite or pinata. Loves David Bowie, Ghostbusters, playing that we are all orphans and writing songs about friends, family, Dinosoar Roar! Hates apologizing not because she doesn't like to admit that she's wrong or isn't sorry, but because she can't bear having screwed up at all. Much easier to knit for than her brother. Sweater, multiple shawls, tops, and socks on the queue. Not mohair socks, though. Sorry kid. 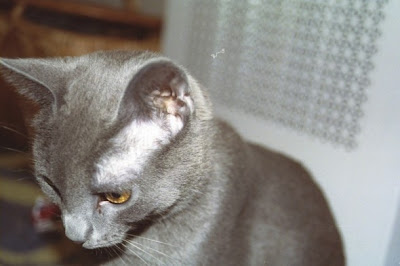 Maud: Admitted baby-substitute, birthday present of two years ago from allergic Dave. Beautiful, both highly entertaining and highly spoiled devourer of fish flakes, roasted chicken, and sushi-grade ahi. (Though she's started turning her nose up at that last one. Imagine.) Also, like Toaster, not nearly so peaceful as one might imagine looking at this picture. One night, as Dave and I were collapsed in front of a movie, we heard a ruckus over in the dining room. A very loud ruckus. But, as nothing crashed to the ground, or appeared in any way broken, we decided we were too lazy to investigate. When we headed to bed, we discovered a trail (somewhat less welcome than breadcrumbs) of pieces of yarn leading from beneath the dining room table, through the kitchen, down the stairs and into the bathroom. 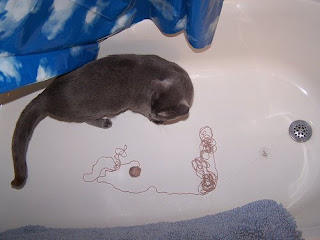 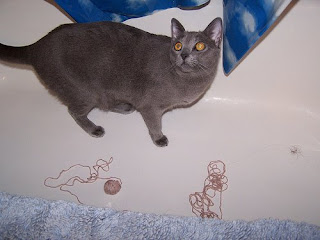 I know nothing of this yarn you speak of.

* I am pleased to report that I cannot take responsibility for these names. They wanted to pick out names for themselves. The girl child has wanted to be called Noodle on some blog or another for years now (mysterious child), and at the last minute tagged on Rock. That'd be the David Bowie influence. As for Toaster? No clue.
Posted by Nikki Van De Car

As you said Nikki, you don't know how Toaster got his name. Well, I happen to know Toaster, and he told me how he thought of it. He said to me "I was in the kitchen when Nikki said that I could pick my name, I said the first thing I was looking at, and I somehow liked it!", and thats how he thought of his name.