Knitting While Reading: The Scorpio Races 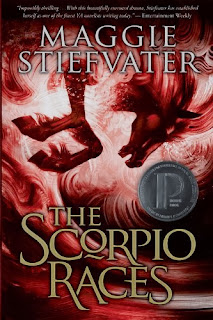 Reading: The Scorpio Races, by Maggie Stiefvater (yes, again)
Knitting: A stuffed chicken, by me

This is actually the second time I've read this, since I'm now repeating my reads of the collected works of Maggie Stiefvater.  I didn't mean to, honestly, but I hurt my neck and couldn't hold the giant hardcover I'm currently actually reading so I had to read whatever was on Dave's kindle, which wonderfully enough included The Scorpio Races (it's on my kindle, too, of course.  We are a multiple electronic edition of The Scorpio Races household).

And there's a reason for that.  I don't have enough good things to say about this book.  My love for The Raven Boys is widely known, and I like the Shiver trilogy okay and enjoyed many things about Lament and Ballad.  But The Scorpio Races belongs someplace else.

It's a novel of place.  Thisby, the fictional island where the book is set, is the main character.  And it is a character; wild, dangerous, savage, with a powerful and terrible love.  It is inhabited by a few hardened locals, and is visited every November by capaill uisce--deadly, carnivorous water horses.  If you're familiar with kelpies or hippocamps, these are similar, but take everything I said about Thisby and apply it to the horses.  They are one and the same.

The story is relatively simple, and it alternates point-of-view between the two main characters.  Sean Kendrick, "one for the horses" understands and loves the capaill uisce like no one else, particularly Corr, the stallion his father died on.  Puck Connolly loves her island pony (sorry, Puck, I meant horse) Dove in the same way.  They are competitors in the races, which have been ridden for centuries, men on capaill uisce.  Only Puck isn't a man and Dove isn't a water horse.

The Scorpio Races manages to be breathlessly page-turning while at the same time so beautifully written that you want to savor every sentence--even the second time around.


All right.  Now that you've finished that glowing review you should know that I generally try to contain my enthusiasm for things and not just vomit my love all over the place.  But two people in my life are, unfortunately for them, completely exempt from that rule, because they are with me constantly: Dave and Willow.  Dave mostly nods and smiles (though he did buy The Scorpio Races!) but Willow, well, she tends to fall head over heels for whatever it is I love.  Which is to say, she loves Maggie Stiefvater.  No, I have not read it to her (yet) but I played her some music and showed her some videos because I wanted to watch them and listen to them.  And she loved them.  It makes no sense why she loved them, but she did. 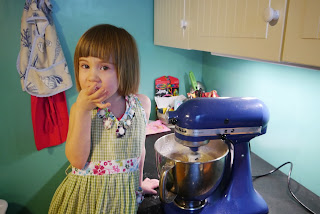 November cakes are, essentially, cinnamon rolls without the cinnamon, with butter and orange zest as a filling instead, and then they are glazed with a luscious honey caramel sauce and, just to be excessive, drizzled with icing to boot.  We skipped the icing because it was somebody's naptime and I deeply regret it because I know excess is the point but there wasn't really any way around it. 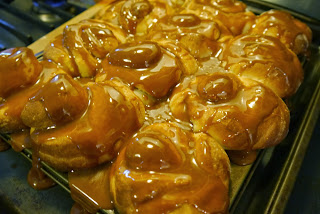 They are much lighter than they appear, almost aerated, but weighted down by that glistening caramel.  They are wonderful with a cup of tea and a blanket.  As is The Scorpio Races.
Posted by Nikki Van De Car

Email ThisBlogThis!Share to TwitterShare to FacebookShare to Pinterest
Labels: food, knitting while reading

lucky you to have someone to share your enthusiasm and lucky Willow to have a mom who shares wonderful things with her.

Beautifully written--a wonderful story of a young woman finding herself and regaining her power after loss. A realistic fantasy novel based on myth that easily creates a suspension of disbelief in the reader. The protagonists are warm and likeable, and their connection to their horses is in itself a heart-warming story to tell. Lots of challenges for the characters and a thoroughly nasty villain. All in all, a great book--I loved it.
Highly recommended Land For Sale in Alaska

While recognizable in its poetic prose and haunting tone, "The Scorpio Races" is unlike any other book Stiefvater -- or other paranormal-romance writers -- have ever created. Slow but sublime.