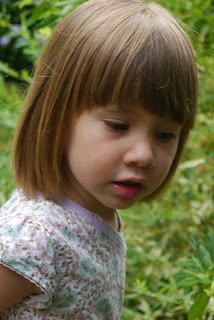 Preschool has been going well.  Ish.  There are tears every morning, but the quick kind that she wipes away because she doesn't want anyone to see.  But she's making friends, and she's following the rules, and she's having a nice time, and we hear about her day and it sounds pretty good.

"Blondie doesn't like me, and I'm flummoxed about why she doesn't."  (Seriously.  She said flummoxed.)

Now, my doting and still-recovering-from-a-kinda-friendless-childhood heart hears this and thinks immediately of the blondes that tormented me.  Stupid mean girls who are blonde and popular and like normal things instead of bats (although My Little Pony is normal!  Blondie must be really mean to be on Willow's case about that!)

And so when Willow tells me, "I did something so beautiful today!  I laughed REALLY LOUD in Blondie's ear!"  I tell her that's not something anybody likes, and that we should treat people the way we want to be treated, but inside I'm all "I know how this happened.  Blondie totally had it coming.  And I'm glad my girl isn't going to lie down and take it.  She can take care of herself, and I'm proud of her.  Plus, that's kind of hilarious."  (To reiterate, I did not say that out loud.  I am not that horrible a parent).

But it got more and more heartbreaking, and it became clear that perhaps we needed to ask the teachers about it, because it seemed like it was interfering with her enjoyment of school in general: "I don't want to go to school because Blondie doesn't like me."

So this morning, we approached the teachers, telling them that Willow has really been struggling with getting along with Blondie, and do they have any advice for us on how to talk to her about that?  We recognize that not everybody likes everyone, and that is a fact of life that Willow should be prepared for (says my inner weirdo child) but we don't want it dominating her day at school.  The teachers look at us blankly and say, "you mean two-year-old Blondie?"

Willow really likes "taking care" of younger kids, and giving them lots of hugs that can sometimes be a little, ahem, aggressive and resemble strangling more than hugging.  Blondie is an assertive two-year-old (as she should be) and has been telling Willow to get off her back, please, and Willow has taken that to mean that Blondie doesn't like her.  But the teachers have been working with Willow on giving people some personal space and recognizing that disliking an action doesn't mean disliking the person.

The funny thing is that Willow's best friend in the world, Buster, has been abused in this fashion for their entire relationship, and he totally doesn't mind it.  "Oh, is Willow hugging me and it's kinda choking me?  I'll make some unhappy noises at her until her mommy pries her fingers away but then I'll go jump on the bed with her as happy as can be!"  And so Willow assumes this is how all children will be, that she can boss them and torture them and they will like it, damn it.  And she's so hurt that Blondie doesn't.

It's sweet, really, in a demented and kinda violent sort of way.

Just wait until next year when Blondie can talk back more clearly. I forsee BFFs in the making

I did giggle so reading this!

I had to laugh so hard reading your blog entry! One of my friends pulled her little brother off the changing table to play with him ... yeah children don't quite get the rudeness and in our eyes violent ways in which they interact :) Love your blog!