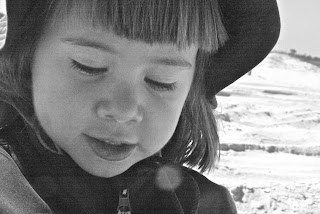 Willow has been working on overcoming her fears.  Being Willow, of course, she does this in a very idiosyncratic way:

And so forth.  It's awesome, except that she freaked herself out with the ghost story and I had to sit in the room with her until she fell asleep.  But I have tried to take her as my inspiration, and overcome some of my fears.  Not fears of snakes, or of talking to people I don't know, because lord knows those aren't going anywhere, but more practical fears that really need to be handled, like stepping out of my routine and trying crazy things because they seem like they'd be fun, even if they might be disastrous.  I am trying to embrace that small side of me that is spontaneous.

Therefore, last weekend, Dave and I followed through on a plan we'd had back when I was pregnant, of driving down to Seaside Park during the off-season, spending the day at Island Beach, staying at a cheap motel, spending the next day at the beach, and then driving home.  Just a quick getaway, something inexpensive and still wildly different from what we normally do.  Great idea!  Let's do it! 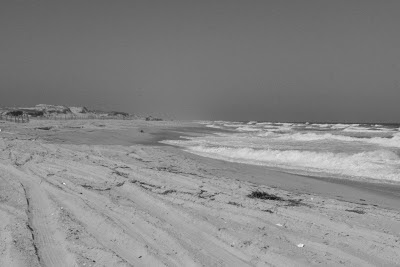 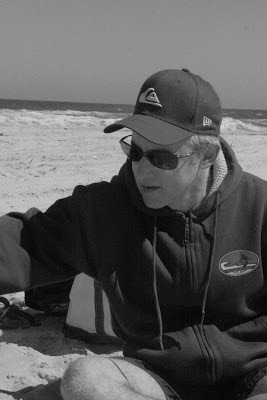 It was beautiful.  It was also really freaking cold.  Like, huddled from the wind in a fleece and a vest and under a towel and still shivering.  Shockingly, not many people were on the beach with us.

But Willow had a blast--she dug in the sand and poured ice cold water everywhere, and Dave and I were happy as very cold clams watching her play and chatting. 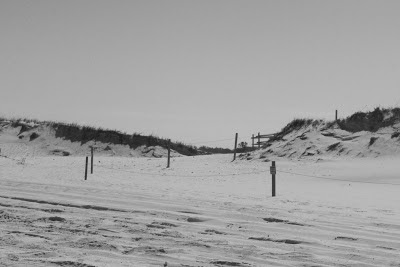 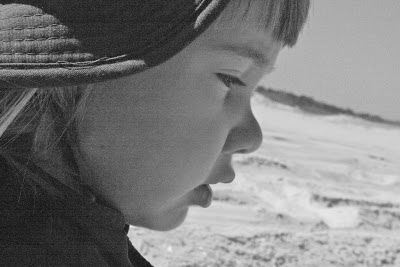 Eventually, though, it got a little too freezing, and we packed up to head to the motel.  Which is where we really needed our pluck.

On the phone with my parents telling them this story, I was reminded of all the places we stayed when I was a kid.  Places where the light fixtures fell down from the ceiling, places where slugs crawled across the bathroom floor, places that, in my childhood memory, had no electricity and moldy walls.  But even with that hardy upbringing, I had a hard time with this place.  For one thing, it was literally fleabitten.  I have flea bites.  It was also, for a non-smoking room, so rank with smoke that everything we brought needed to be laundered as soon as we got home.  There was a small nail sticking out of the couch.  I was able to report that the people next door were watching The Goonies.

And both Dave and I, separately, were having internal arguments.  "Don't be so snotty.  It's fine.  You're imagining the germs.  Of course it's clean.  Of course nobody died here in a horrible and violent way.  Quit being such a drama queen."  Willow, of course, thought it was the most awesome place ever, and ran around and jumped and hid her toys in drawers we really didn't want to go poking around in, and was generally a maniac.  We spent about 20 minutes in there before hauling her out to go get some dinner.

At dinner, we went back to ignoring the motel, and had a blast--Willow marched up to the hostess and demanded to be served crab and fish and birds for dinner.  Which is, of course, so charming.  Dave and I took turns dodging the linguine worms they actually gave her (and Daddy pretended his dinner was a goldfinch, so she ate that too) and laughed and felt relaxed and carefree, a feeling we almost didn't recognize.

But then, of course, we had to eventually leave the restaurant, and we went back to the motel.  Where we got everything settled for sleeping before I finally confessed to Dave that I was having uncharacteristic germophobia issues.  Dave said, "Thank God, me too."  And we discussed leaving, and just driving home...and we really considered it, but it just seemed so cowardly.  It was one night.  We tightened our stomach muscles, and decided to stay.  I put Willow down to sleep in the bedroom and went out to sit with Dave and we drank tequila to sterilize and played Gin Rummy and actually had a blast.  We didn't do much of anything differently than we do at home, but for some reason, it was so much more fun.

And when, the next morning, it dawned even colder than the previous day, we drove home and took crazy hot showers and scrubbed everything and decided that it was great!  But we would never do it again.

*I don't really know what to do about the overuse/misuse of the word "pluck."  She really likes it.  She also misunderstood my explaining to her that physics meant that she'd fall out of her swing if she leaned way back like that, and so now when she's crazy in the swing and giving her mother a panic attack, she claims she's doing physics.
Posted by Nikki Van De Car

Awww, she's just her brilliant self!!!! Must be my genes.