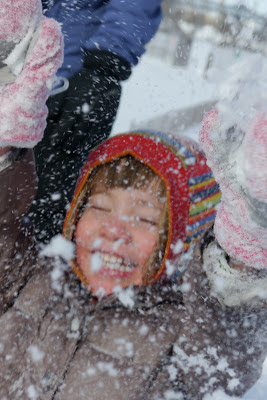 About a week and a half in to our toilet-training smackdown, Willow woke up in the night moaning "I have to go."  Dave went in, was negotiating with her, and I (half asleep, and not even noticing he was in there because it's usually me she's calling--not this time, which should tell you something) wandered in, and told her "Oh, sweetie, it's okay, you can just go in your diaper."

In my defense, according to my plans and research, waiting a good long while for potty-training to set in is the way to go, and it's either just going to work on its own, with no getting up in the night to pee, just magically waking up dry someday, or it's going to be waiting until it's really time, and then stripping off the diaper and letting them wet the bed and feel how uncomfortable it is and that'll do it.  Obviously I was hoping for the magical waking up dry one.  But the third option, the getting up in the night to pee, I wasn't really willing to consider as a possibility, because yo, this girl pees every three hours, and won't stripping her down out of her footie pjs really wake her up, and doesn't that basically put us right back in the days of waking every two or three hours to nurse, for crying out loud, and I'm so not ready to do that again. 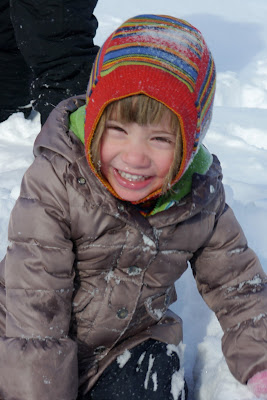 Of course, come morning, Dave confronted me about my ranking selfish need for sleep over my daughter's really very impressive self-directed potty-training the in the night, and how perhaps my approach was not the best, from a parenting standpoint.  And I agreed grudgingly that if she really, really wanted to pee in the night, he could take her, but I wasn't getting up with her.  All of you other moms out there, just give up the competition for Mom of the Year, because I have got it locked down.

(Honestly, I was exhausted from the potty-training.  This seemed like trying to take the SATs just after learning to read).

Of course, the next night, we both got up with her, because getting a child in and out of footie pjs and the stool set up and diapers put on and off is a job for more than one parent when at least one of said parents is incapable of letting somebody else handle things even when she says she wants him to.

And so began a pattern of getting up at one or two a.m. (just me, after that first night) and thankfully, it wasn't that big a deal.  Willow went right back to sleep each time, and if I didn't, well, at least I wasn't sitting up rubbing her back or singing songs or something.  And then that pattern changed to getting up at 5 am, and then to 6 am, and then to 6 am but not needing to go until 7:30, and anyway we've gotten rid of all our diapers now.

I am beyond proud of my kid, and more than a little ashamed of myself.  I can take no credit for this one, in fact I was as obstructive as possible, but Willow did it anyway.  Rock on, kiddo.
Posted by Nikki Van De Car

Little Man is still avoiding the potty but he's only a little over 2 years old. He's peed on it once, right after a bath and he was doing the "pee stance."

Since then, he hasn't had much interest. I ask him if he wants to sit on his potty and I get a very loud, "NO" so, I don't bother :)

As long as he uses the toilet and drinks from a cup by the time he gets to kindergarten, all is well!

It took us forever--you're totally fine!

LOL -- you have it locked down.

Good for Willow!! My son's began potty training at 2.5 and he turned 3 in Nov and still completely soaks a diaper at night. I'm waiting for him to wake up magically dry and I think it's going to be a long wait. I am soooooooo not taking off that diaper until then -- I hate changing pee sheets worse than I hate getting up in the middle of the night!