Until this year, I had never hosted a Thanksgiving.  Which I know is true for lots of people--many of us tend to travel, to visit our mothers who have made us Thanksgiving dinners for all our lives, but I had a deeper, long-standing reason: I fear turkey.  All bird carcasses really--because that's what they are, and not only that, it's what they look like.  Never is it so clear to me that I am eating flesh that is on its way to rotting than when looking at a bird all ready for roasting.  Plus the little packages of bloody bird bits are just so appetizing.

I know that if I'm not going to be a vegetarian (and let's face it, I'm really, really not) then I'd better suck it up and learn to deal with raw meat and not be so hypocritical.  And I have--since my teenage days of refusing even to be in the room when the turkey was being prepared, I am now perfectly capable of cooking all manner of meat, poultry or otherwise, and have roasted many a chicken.  There should be anything more to a turkey, except perhaps an hour or two of cooking time.  And when circumstances aligned in such a way that we weren't going to be traveling anywhere this year, I decided to take the final plunge and douse myself in the tradition of sweat, blood, and little packages of guts.  (I was not, however, going to inflict my inexperienced cooking on anybody I didn't have to, so it was just the five of us for Thanksgiving). 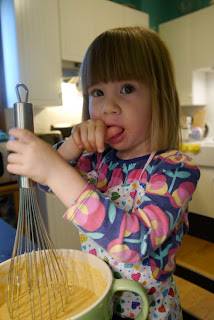 Willow and I started cooking on Wednesday.  We made a pumpkin pie, and Willow helped every step of the way.  Which is why there were some bits of carrot in the crust.  Then we worked on the stuffing, and then we called it a night.  Which in retrospect was a mistake.  I should have made turkey stock, too.  And about a hundred other things. 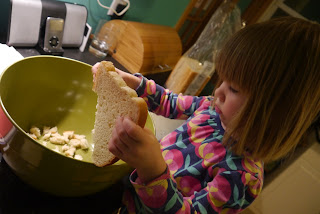 Because the turkey wigged me out, man.  I know it's illogical, but those birds are so big, and so weirdly muscular and fatty at the same time, and slimy...well.  Not my favorite.  I made Dave go a-hunting for the little bloody packages, but all he found in our turkey was the neck.  I asked, "Did you go waaaay in?"  He said he went up to his elbow.  No turkey parts.  I shrugged.  Gravy aside, a lack of icky turkey bits wasn't exactly something to cry about. 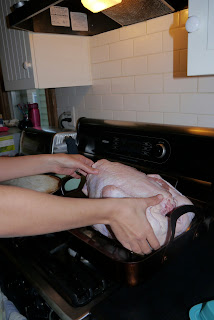 There.  My hands are on the turkey.  It is proven.  And it was kinda gross-feeling.  But I got it in the oven, and we went outside to play, as is traditional, and as was comical, since Willow went as an owl, Toaster tried to actually play a game kind of, RockNoodle was distracted by Willow the Owl and so her hand-eye coordination was, er, lacking, and Dave just kept sabotaging things. 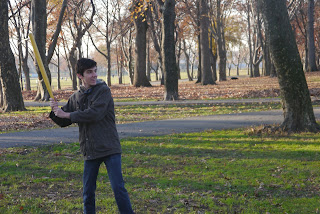 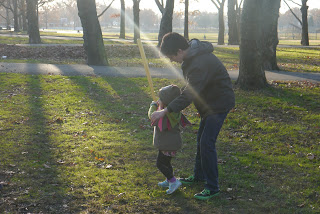 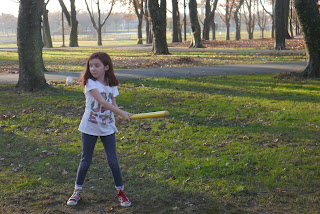 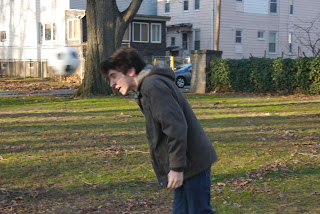 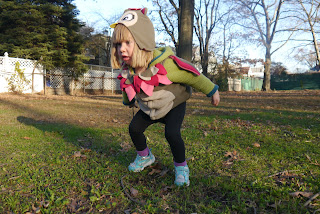 I think Willow was trying to fly, not trying to bounce a soccer ball off her head.  I could be wrong though.

So that was fun, though it was, in retrospect, a really really bad idea, because while I only spent one measly little hour playing outside, that was an hour I could probably have really used in the kitchen.  I brought the camera in with me, and then pretty much never picked it up again, as I made brussels sprouts, and gravy, and whipped cream, and mashed potatoes and checked the turkey and checked the turkey some more. 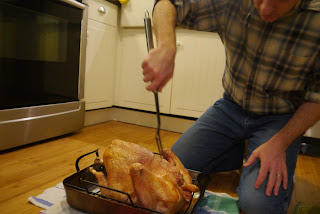 I made Dave flip it.  It was just too heavy. 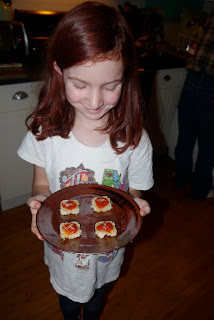 RockNoodle made crudites.  Because I needed them.  Because I was (despite the popovers she'd made for brunch earlier) starving, and surrounded by food, none of which was ready.  Our turkey didn't come with one of those popper things, and the recipe I used called for a waaaay shorter cooking time than normal, and did not specify a temperature we should reach.  The temperature specified for poultry on our thermometer is, shall we say, a little on the overly cautious side, and we've been ignoring it for chicken for quite some time now, since we like chicken that doesn't feel like you're eating plywood.  But despite knowing that, we* were still a bit freaked out by the short cooking time, and so we put it back in for a while, and then when the turkey seemed to have actually gotten colder with that extra time, we put it in for a while longer.

That's when I started with the vodka. 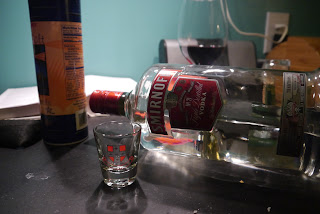 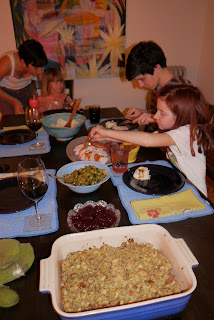 But it finally cooked, and we finally ate, and it was finally delicious** and the stuffing that I do not call dressing thought it was in fact not stuffed into anything was also delicious, and in the end it was kind of fun, and totally something I would try again, only I think I would want people to bring some stuff next time.

And yes, we were so excited to declare the turkey done that we did not even take a picture of it in all its glory, but here it is half-hacked*** and ready for consumption: 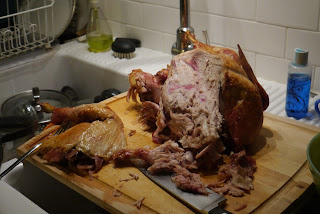 ***You remember the missing bits of gizzard and liver that Dave went a-hunting for and did not find?  We found them.
Posted by Nikki Van De Car

The pieces were in the other orifice. Been there done that. Haha.

My husband has discovered an easy way to make a very juicy turkey. It doesn't look pretty, but it tastes better than any other turkey we've eaten. :) The important step is to completely cover the turkey, and use a reliable meat thermometer; then bake the turkey at 350 degrees and do not open the oven *at all* until the meat thermometer reads 180 degrees (not even to baste the turkey).

I've typed out his entire process at my livejournal page, if you're interested. Feel free to print it out or save it for next year; though if you choose to do these steps exactly, you may wish to convince your husband to cook it. ;) It is incredibly simple, but requires more handling of the bird than you may be comfortable with. :)

(I found your blog while browsing knitting blogs. You have a lovely family, and congratulations on the book! :) )

That sounds a lot like what my mom does! I'm definitely going to look into trying something like that...thanks!

That's what I did! But I think I left it in too long.

When ever I cook a chicken/turkey, i always remember my mom dancing the chickens across the cutting board as she was singing. doesn't make it less gross, just makes cooking chicken easier with a silly memory.

That's hilarious. My dad used to sing "Here comes the gizzard, the wonderful gizzard of Oz."

No, "we're off to see the gizzard, the wonderful gizzard of Oz!"