(Which sounds weirdly like Sister Wives...Fairy Sisters?  Sisters of the Fae?) 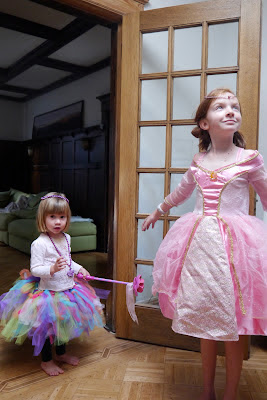 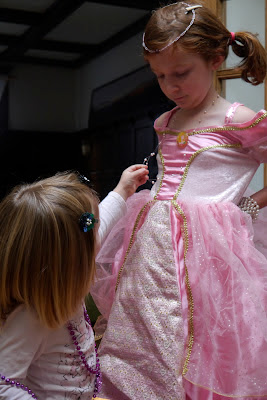 I think it must occasionally be hard to have a big sister.  It is sometimes very hard on RockNoodle having a little sister who always wants you around and always wants to mess with your stuff and always wants smaller versions of your toys/food/clothes/life.  Though she should count her blessings--I was cursed with a little sister who showed her love for me by wanting the exact opposite of everything I wanted, and by being very mean to me.  (I do not claim, mind you, that I was not mean back.  But we were never Sister Fairies.  If I was a fairy, my sister ripped my tutu.  If she played basketball, I rolled my eyes and brought a book).

But I wonder if the reverse is true as well.  If perhaps it's hard to want to do everything your sister can do, and be utterly incapable of doing so.  It can be hard to watch both of them--poor RockNoodle, wanting to be able to go into her room to read or chat with her friends without her little sister pounding on the door begging her to come out.  And poor Willow, waiting all day to see her only to watch her disappear into her room as soon as she comes home.  (Which obviously isn't how it always is--note the photographic evidence).

I'm sure Fairy Princess Aurora will catch up eventually, just like my sister and I managed to find shared love of--it turned out--just about everything, only from different perspectives.  It's interesting for me, watching such a different relationship, with so much shared understanding from so early on.  Willow and RockNoodle don't look very much alike at all, but Willow made a face yesterday, a dropped chin, droopy-eyed pouty face that was an exact echo of one her sister used to make.  She still makes a version of it, but this was almost identical to 4-year-old RockNoodle, who of course, Willow has never seen to emulate.  And I guess she didn't need to.