I Am Stubborner Than My Yarn, So Help Me 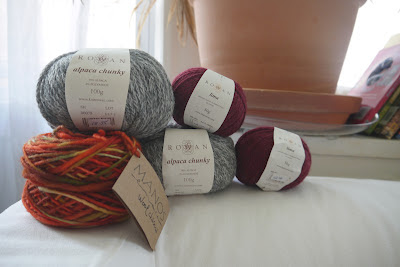 So I finally managed to get my act together and dump my child with some other responsible adult and get over to 2 Stix and a String, the new yarn store in Jersey City.  And ooh, did I get some goodies.  A Manos that seems like an extra-saturated Fall afternoon, and two placed I'd never before ventured--Rowan Alpaca Chunky and Rowan Lima.  I have never knit with chain-constructed yarns.  There's never been a really good reason for this, I just have never liked the look of the yarn itself as much as other yarns, and had concerns about drape, warmth, etc. that were based only in lack of knowledge and not out of any real understanding of the yarn itself (since I'd never knit with it, of course.  Vicious circle...) 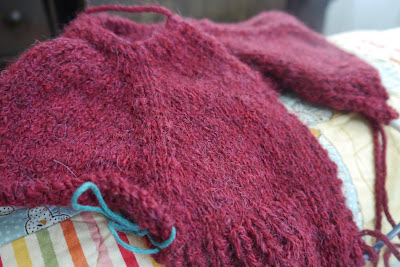 These concerns were, no surprise, completely unfounded.  The fabric the Lima is producing is dense and yet light, very soft and extremely warm.  And it is pissing me off.

It's not the Lima's fault, really.  It's just that it and I seem to have very different ideas about what this sweater wants to be...it immediately made itself clear to me that it wanted to rib, but I wasn't really all that interested in knitting a ribbed sweater--I wanted something cozy but feminine.  So I gave it a tiny bit of ribbing and told it to be satisfied.  It complained.  It's behaving like a toddler, and I already have one of those.

I'm not saying I don't like you, Lima, I'm just saying that you are not the boss of me.  And I'm not reknitting this sweater for the third time--we're just going to have to come to some sort of compromise.  I promise, the next Lima sweater I knit will have so much single rib in it my wrists will never forgive me.

As for the Manos, I lucked out and got a glimpse of what it looks like all knit up--I got together with some friends for a "Crafternoon" yesterday and spotted my very same Cornucopia colorway in Anna's bag, knit into huge and gorgeous leaves.  So that was a nice little gift.  But the rest of the afternoon was rather disheartening.  I was informed that we were under no circumstances to bring anything that could be considered work to this event, and so with a sigh of relief I left the Lima sweater at home and pulled Paper Dolls (remember, months ago, when I was working on that?) out from the back of the closet.  And I sat there for hours and worked on my i-cord cast on and my corrugated rib while Anna made an octopus and Jane finished socks and Jen made a duvet cover, two bags, two tie-backs, and fixed a skirt (therein lies the difference between sewing and knitting) and I....knit one inch.  I'm not even bothering with a photo of my one inch; it's too pathetic.  This right there is why Paper Dolls sits in the back of the closet.  Lima, you've never looked so good.
Posted by Nikki Van De Car