So I Wrote Another Book.... 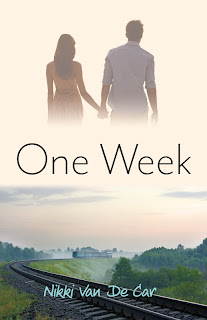 Now to be found on Amazon.com, One Week is my Young Adult novel.  It has nothing to do with knitting, nothing to do with babies, but is instead a retelling of It Happened One Night (and warning: the main character starts out just as annoying as Claudette Colbert does.  Though I like to think she grows on you).

"It took me six days to get to New York, and one day to get back.  In those six days, I starved, I stank, I hitchhiked, I broke-and-entered, I lost my virginity, I sort of found it again, and I learned that love and hate have a lot in common, really.  In that one day that it took to come back home, I learned that all I had gone through had no point at all, except for how it meant everything to me."

I started it when I was pregnant and on bed-rest, took a nice long break during the first few crazed and sleepless months of Willow's life, and then finished it up during naps once we settled into a routine.  I am now more familiar with Amtrak's California-to-New York train schedules than any normal person should be.

It occurs to me that the target audience for this likely won't catch the various Capra and Hitchcock references that I giggled to myself over while writing it, but if any dorky grownups (or dorky teenagers) read it, keep an eye out.

Very lovely photos! Nice website, so thanks. I've always aspired to recommend the academic writing service website. Here you can observe vast amounts of essays, dress style examples and so forth. A lot of ideas!