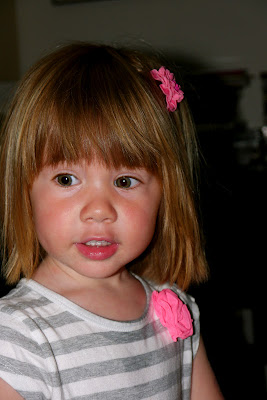 I hate hate hate it when my girl gets sick.  It's not that she's a poor patient--she's actually amazing, and is generally in such a good mood that she's running and jumping and giggling with a high fever which keeps me from worrying, but is extra exhausting when I'm also sick, which was true this last time (I am not a good sick person.  All I want to do is lie down.)

It was rather inconvenient, though, since we had a wedding to go to on Saturday and a birthday party to go to on Sunday, and we were very excited about both those things, and the day we got sick was Daddy's birthday, and nothing says Happy Birthday, honey! like "I just threw up, please come home now."  (And nothing is more fun than throwing up while your toddler stands next to you flushing the toilet over and over and demanding that you stop doing that and read a story instead).

So despite Willow's desire to do otherwise, we rested and rested and our fevers went away and by Saturday morning we gauged that we were perhaps at about 75%, which seemed like enough to go to a wedding.

And so we went.  And had a blast.  Willow abandoned us in favor of the tent with thoughtfully-provided babysitters who had play-doh and bubbles and hungry, hungry hippos, though rejoined us later to take over the empty dance floor, slider in hand, and dance like there was nobody around.  (And then proceed to do the same thing when there were about a hundred people on the dance floor, but that was fun too).

She seemed totally fine.  She wasn't feverish, and we left as soon as it seemed like she was fading (an hour and a half past her bedtime, but still).

But her fever came back in the night, and we spent the whole night dealing with her fever dreams.  Sometimes she's asleep and talking and moaning, but the worst is when she's awake and hallucinating.  The other night I had to literally reach into her crib to pretend to take out a big orange shark in order to calm her down.  She always gets them when she has a high fever, and it can take a while for the medicine to kick in, and it's just so scary.  I'm mostly used to it, I know what's happening, but it's still awful.

And we spent the next day hovering between non-responsive near-catatonia, and a low-energy, low-key version of Willow.  Needless to say we did not take our high fever to the birthday party.  I was suffering enough guilt over having dragged her to the wedding that we were taking her temperature every couple of hours and obsessing over her fluid intake and really really trying to restrain ourselves from calling the doctor (who would only say "it's a high fever, there's nothing we can do, kids get them, let us know if it continues, that'll be a $35 co-pay.")  But by yesterday she was better--not much energy, but no fever, long nap, roseola developing in the afternoon, which is always a little unsettling, but does at least mean the fever has passed.  And today we're better still.  We went to the playground, and we crashed hard and fast with exhaustion after an hour and a half of swing-riding and twisty-sliding, but hey, at least we got out.

EDITED TO ADD: Of course, OF COURSE, it's not Roseola.  And of course, OF COURSE, the breaking fever didn't mean anything, and I should have trusted my instincts and called the doctor when I wanted to and ignored the fact that Willow had some energy because she'd have energy if she had mononucleosis--she's still sick.  She woke up from her nap very fussy and with a spreading rash and a complete unwillingness to eat anything--and I hit my breaking point.  We coughed up our co-pay, and were told that she has Coxsackie.  And that there's nothing we can do, let us know if it continues.  But at least I now know that she's sick, and how sick, and can make her act accordingly.  Now eat your popsicle, kid.
Posted by Nikki Van De Car

I am so sorry you were both sick. I agree with you, that it's way harder on us moms when our kids get sick. Simply because we don't want to see them suffer. My 3 kids all went through Roseola and HFMD. My oldest even had febrile seizure because of the Roseola (high scary fever). The first experience was always the scariest. I hope you both start feeling better soon.