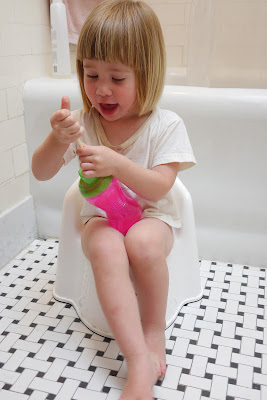 Well, I fucked up.

I did everything I possibly could to avoid avoid it, thereby guaranteeing that of course I would.  I bought books, I read hundreds of things online, I solicited advice from my doctor, from my mother, from random women at the playground, and tried from this vast wealth of conflicting information to put together an understanding of the timing and a coherent plan of attack.  Willow showed interest--check.  Willow woke up dry from naps--check.  Willow sometimes went dry for several hours--check.  Willow hates wearing diapers--check.  Willow was older than 18 months but younger than 3 years--check (there's an example of conflicting information and me splitting the difference).  It was warm enough for naked time--check.  It was a period in which we didn't have too much traveling/activities to do for a while--uh, half check?  That period doesn't exist.

So following all of this, and all of everybody's very helpful advice, we kept at it, with m&ms, with stickers, with cheering, with restrained matter-of-fact congratulation when she no longer gave a crap about any of that (she would actually refuse an m&m that she had earned because she couldn't be bothered). 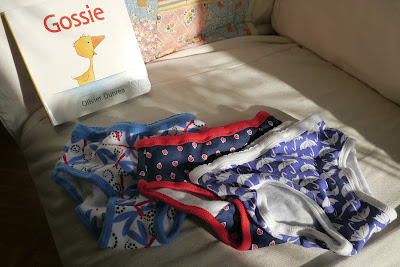 We saw progress--fewer accidents, a serious unwillingness to wear a diaper, success on the potty every time she went (though she never went on her own, only at our firm "suggestion").  And figuring that she needed that final push to take the next step, we went out and bought some underwear (with umbrellas!  and ladybugs!) and said "See you later diapers, we've had enough of you!" 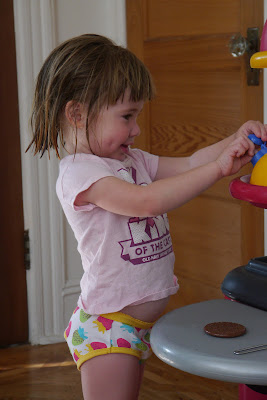 And...it backfired.  She would still go when we insisted on it, but she was less and less interested in doing so, and honestly didn't care when she had an accident.  She sure liked her new underwear, and was very impressed the strawberries on them, but if they got wet they were still totally fun to wear, so what was the big deal?  It never occurred to her to go to the potty on her own, and she would quite literally sit on the potty as requested, go a tiny bit, and, bizarre parental needs satisfied, then go squat under a tree and finish up.

She just didn't get what we were asking of her, and feeling confused and frustrated (and certainly picking up on my not-particularly-well-concealed-even-though-I-really-tried confusion and frustration) began to break to bits.

All right, it wasn't that bad, but to me, stressed out, sleepless, guilt-ridden and convinced that I'd screwed up her body and psyche for life, it was pretty bad.  Willow is about a one or two tantrum a week kind of girl--now it's daily.  Willow had been getting bedtime back on track--now it's horrible again.  Willow had been napping fine (yay bribery!)--now we're even showing signs that we're headed downhill there too.

We tried to put the genie back in the bottle, but she really did hate wearing diapers, and now that she's discovered there's an alternative (i.e. peeing on the floor/bed/couch, or when Mommy tells you to go on the potty) there was no way to get them back on her.  It's a WWF match with screams and tears just getting them on at nap and bedtime.

Obviously we could keep trying, but I'm not sure any of us can handle it.  I wish that I were as calm and collected and had as little invested in this as the books suggest--but I'm just not that person.  And since I'm not, I'm making it so much harder for her than it needs to be (and I'm aware of that, and feel guilty and stressed out because of it, which makes it worse, and this is a horrible cycle and I want somebody else to do this please. )

I got a diaper on her today at nap by pulling out some "special diapers that even big girls wear" and the novelty of that was acceptable, and maybe that's our way out of this mess.  Pull-ups are freaking expensive and frankly cutting down on diaper costs was one of the reasons we thought we'd move forward with this, but I honestly can't put us through this anymore.  I'm feeling like a terrible mother, and I feel awful for my poor confused baby, but I can find a way to fix this.

I know you are stressed and concerned right now but it will get better. She'll come around in her time. Just give her time. We haven't even ventured into potty training yet although we've been putting her on the potty since she was about 10 months old to avoid poop in the tub but she still isn't ready. Just as you were able to master the nap, which again you will be able to do again, you will get this! hang in there and hope you get some knitting time to destress!

Honestly honey, dont stress it. My son was 4 last Oct and only THIS April has he started to use the potty. He was the other way, and just wouldnt/couldnt go. Give it a break, if she hates diapers so much she'll realise that she does like the pants/potty/m&ms.

I think I've told you before, but I'll remind you that P wore a pull-up at night until she was 5. Peed in it every single night until one day she didn't. We ditched the pull-up the next night and never had an accident. She wasn't ready. I think pull-ups get a bad rap, frankly. They can be really useful. The process, like all developmental steps, is different for every child. As for the expense, if your kid only has one on for accidents, you won't go through that many. I actually hated giving up the daytime pull-ups when P was 2. Having her pee freely in the backseat was way easier than finding a place to go comfortably in the middle of the Rockies.

Thanks everybody...of course, as these things go, it all seems to be fine. She wore her pull-up, and then when the time came for a diaper change I put a regular one on her without comment, and there hasn't been an issue since. I'll bring it up again with her when she's five.