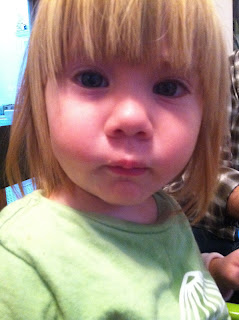 Okay, what is going on around here?  We have had illness, but that's manageable, considering that Willow is a very good sick girl, in that she doesn't whine overmuch, she drinks lots of fluids, and puts up with nose-wiping as best she can.  What she has not managed to do, however, is sleep.  Up until the last couple nights, I have been operating on less than 2 hours of sleep, as a certain small someone has awakened, so stuffed up and panicked because of her inability to breathe that she cannot possibly get herself back to sleep, and so has come into our bed.  Where she has sung Jingle Bells to herself, and repeated certain phrases incessantly a la Rain Man.  (Yep.  That went on for two and a half hours one night.  "Yes, sweetie, you do have your blanket.  Now go to sleep.")  And then when she finally did fall asleep, she woke every hour needed to be rubbed back to sleep.

I know this used to be our daily existence, but I am not wired for it anymore, y'all!  I was walking into walls!   (Especially on the day when she wouldn't take a nap either.  That was extra special).

Willow seems to be catching up on sleep now, with longer-than-usual naps (I know as I type this that I am guaranteeing myself a short nap today) and easy-enough bedtimes.  But things are still not normal.  Willow's Mommies have reached epic proportions, so much that she literally pushes Dave off the couch so she can have Mommy all to herself.  Our household tantrum quotient is way higher than normal, and our ADHD factor is off the charts.  ("Hey, you just asked me to put on the Elmo cd, it's on, why are you freaking out because you want to eat the plants?  Why are you eating the plants???") 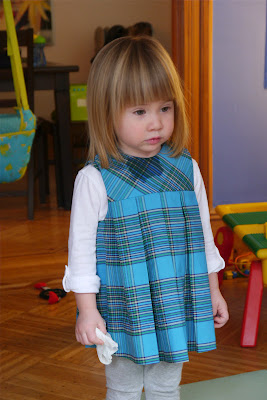 And even all that could be attributed to normal sick toddler.  But this morning's episode was totally uncalled for.

Dave was finishing his breakfast, I was trying to bring order back to the house, and Willow was squatting in the corner pooping.  Normal morning so far.  As I finish tidying, I suggest that we go change her diaper.  Willow's response is firmly in the negative.  I grab my coffee and sit down for a few minutes, figuring I'll change her when she's picked up a portable toy or seems slightly more amenable to the suggestion.  I try not to breathe through my nose so that my coffee doesn't taste like poop.  All of this is also normal.  Dave comes to sit with us, sniffs and wrinkles his nose.  We shrug.  Willow squirms about uncomfortably, then gets up to go over to the toy box.  I take a second look at her and shout at Dave to "pick her up immediately under her arms whatever you do don't touch her butt!"  We wrestle her onto the changing table, open her pjs, and Dave says, "Oh my God.  Where did her diaper go?"

Her diaper, my friends, had fallen down the leg of her pjs.  I do not know how this occurred.  I only know that my child had a legful of poop.

I said, "Hey kiddo, want to take a shower with Mommy?"  We plopped her in and stripped her down in the shower and I hosed her off.  Willow, by the way, thought the entire episode was freaking hilarious.  I, who showered with poop, and Dave, who cleaned out pjs full of poop, found it less so.

But hey, everybody was showered before 8:30 am this morning, and that never happens.  Gotta appreciate the little things.
Posted by Nikki Van De Car

I know it wasn't funny to you, but, thank you for making me start my day with tears in my eyes from laughter. Love you

That made me giggle too! I'm looking forward to hearing potty training stories in the future!