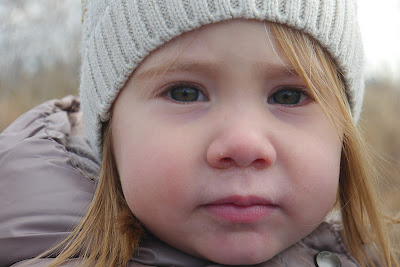 If Willow had gone to day-care, would she still, at age 2, be unable to share?  Okay, probably.  But would she be unwilling to converse with other children?  Maybe.  But would she totally lose it because she's in a situation outside of her precise just-mommy-and-me-by-ourselves-in-our-house norm?  I'm not so sure.

This situation, mind you, was nothing extreme.  Yesterday, we went to a friend's house (where we had been before, more than once) to hang out with a couple of other toddlers.  As is important for the socialization of both the child and the mother, no?  Willow was so excited she flat out ran the 3 blocks it took to get there, and when we arrived set right about tearing the place apart, as two-year-olds are expected to do.

I had prepared her as best I could--changed her and gave her milk right before we left, and while a smarter mother would have brought snacks, we weren't planning on staying long, and there was going to be food there.  Very kid-friendly food.  Like eggs.  And cake.  Willow loves these things.  Frankly, she loves almost all food.

When she doesn't particularly care for a food, she lets it drop out of her mouth and moves on.  Today, her eggs were spat out with such gusto they got all over her face.  Lovely.  And very polite to our hostess.  And the cake?  Even more gusto, with a full minute of spitting, so that there was cake on her face, on my face, on my clothes, and on the floor.  One tiny bite of cake can have quite the range.  "That cake so yucky."  Loovvveely.

So forget snacking.  Obviously you're not starving if you spit out perfectly delicious cake, so go play, kid, and maybe we'll leave a little on the early side.  And sure enough, about half an hour earlier than I'd originally planned, Willow asked to depart.  And while I didn't exactly jump up and hustle her out the door right that second, I didn't try to delay her, and I did start preparing for the exodus.  I honored her wishes, and she saw that I was doing so.

And so imagine my shock when I sat her down on my knee to put on her boots and was greeted with the shrieks of a victim of the Spanish Inquisition.  I explained that in order to get home, we needed to wear boots and a jacket.  As is always the case.  It was as though I had turned the rack even tighter.

Where is a teleportation machine when you need one?  I would have paid hundreds of dollars in order to be three blocks away in my house without having to force my child into her jacket.  We abandoned the shoe idea, and I carried her all the way home (mind you, she was chatty and pointing at birds in trees by the time we were ten feet out the door). 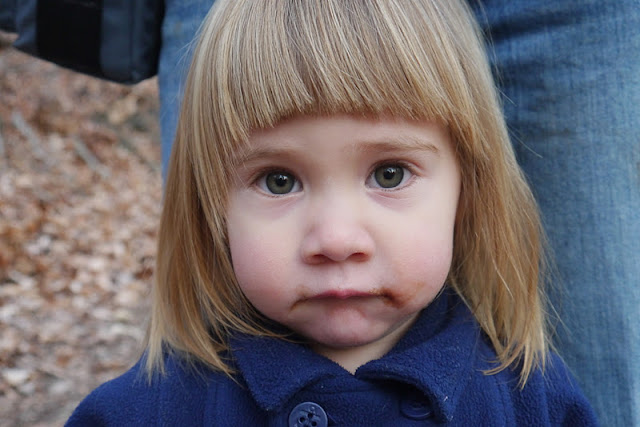 I'm still making plans to meet another friend with another toddler to go to the Children's Museum of Art.  Because that's what you do.  You keep trying, right?  They'll never manage new situations if they're never experience new situations.  Plus I'd go nuts with the cabin fever and probably end up eating her or something.