Baked Nikki, With a Side of Flies

So it's been hot.  All you read about is how it's hot.  All we talk about is how it's hot.  "Hey, how's it going?  We're rockin' 108 degrees here, you?"  So I wouldn't bore you with more hot talk except for how OH MY GOD IT'S HOT.  I am not used to this kind of heat, and let me tell you, ten degrees above my body temperature tends to make said body panic--my heart races, I get confused, dizzy, and very, very cranky.

Friday was the worst day, but we were kind of stuck in town because of my aforementioned fear of driving outside of town, not to mention were we to go to a pond, we would just be sitting outside, baking in a giant wicked old witch oven.  In the end, we went to Liberty Science Center.  It was awesome.  And air-conditioned.  But that still left plenty of time sitting in the small amount of house we were able to keep cool, and we swore that on Saturday we would hightail it out of town and get ourselves to a beach.

Dave, Willow, RockNoodle and I left before 8am, Toaster having wisely decided to stay in town, and drove the long way to Island Beach State Park, one of our very favorite beaches, hopped out of the car excited to enjoy our day, only to be greeted by....flies.

At first we just shrugged.  Willow, in all her innocence, was actually delighted.  "Hello little friends swarming around me!  Bzzz bzzz!"  But then, of course, they started biting.  RockNoodle started panicking (she and bugs were never friends), Willow howled a wail of betrayal, and we all rushed headlong into the water to escape them.

This did not work.  If anything, the flies were enraged at our attempted escape, and they summoned reinforcements.  After half an hour, each of us had our own battalion of fifty flies, biting and buzzing and generally terrifying all of us.  It was like The Birds, I kid you not.

After about forty-five minutes of this, we gave up (we had driven an awfully long way, and we are stubborn people).  Dave went to pack up the stuff, while RockNoodle, Willow and I huddled by the water, where the flies were slightly less numerous.  And bless Dave for his heroic efforts...but the flies proved to be too much for him.  He came down to the water with the (cloth) cooler slung over his shoulders, the baby carrier clutched in his hands, and at least 75 flies buzzing around him.  I traded him baby for carrier, and as I turned back to him after buckling it on, I discovered him waist deep in the waves, drenching the cooler and the baby that needed to go into the cloth carrier.  I'm all, dude, what are you doing?  He just shuddered. 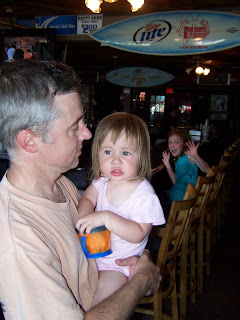 In an attempt to salvage the day, we went to Bum Rogers, where we waited patiently for them to open so they could serve us beer and crabs and fries.  Indeed yes, we drank beer before 11am.  We deserved it. 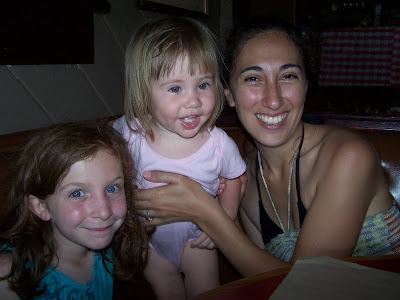