You know when there's been a dearth of substantive posts, and instead a glut of photo-heavy posts with tiny captions, that something really interesting is going on and I should really post about that but it's emotional and laden and potentially controversial and thus I procrastinate.

This time it's weaning. 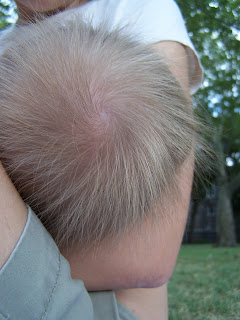 First of all, I am weaning.  In that I am saying "No.  Thou shalt not nurse right now."  And that right there is enough to make La Leche Militants gasp "No!  Betrayal!  You will destroy your relationship with your child!"

On the other hand, I am not weaning.  In that I am not saying "The end, no more nursing, you're done."  And a generation of mothers scratches its collective head and says "huh?  Well, what are you doing then?"

It's complicated.  I didn't think I could just stop--this child likes her some breastmilk, and while yes, she would eventually get over it, the two of us are together all the time, and getting into a battle over this would involve her clawing at my shirt and screaming for days on end.  No thank you.  I don't need to wean that badly.  But I would like to, you know, go out to dinner someday, or go out with friends, or do anything that all that doesn't revolve around Willow's sleep schedule, and I can't do that until she stops nursing to sleep.

I know.  Totally should have nipped that in the bud ages ago.  I'm hanging my head in shame.

I had no idea how I was going to do this.  In an effort to have some sort of system in place, we bought Ferber, though in the end our approach bears little if any resemblance to his method.  After a few very stressy days, Dave and I decided that I would still nurse her before bed- and naptime, but it would be for a shorter period, and I would put her down when she was much more awake than she had been used to.

We would also ditch the morning nap entirely.  I know I talked about doing this previously, but I abandoned the attempt when it seemed to go so poorly.  But then she started waking in the night while still taking two big-ass naps during the day, and that really wasn't working for me.  This time we've been successful.  She had about five days when she was like, "What?  I want to sleep now.  This sucks.  Hold me, Mommy, while I whimper.  For the next four hours."  But for the past couple of days, she's been much more alert in the mornings, and while she is definitely very tired by the time she goes down for her nap, she has been a much cheerier baby overall--cheerier, even, than when she was getting two naps.

The nursing has been a little more of a challenge.  She did NOT like being put down before she was good and ready, but per Ferber, we let her cry and Dave went in and petted her, and it was miserable for everyone.  She did eventually get to sleep, but not before I was a total wreck (partly because I insisted on sitting and listening to her cry on the monitor, which Dave thought was insane but I felt was my just punishment).  And it only seemed to get worse--she didn't cry for less time each night, but more time, and started waking again in the night.  Her one nap kept getting shorter and shorter, and it just didn't seem to be working out.

And so, one night, I just couldn't take it, and after I put her down I rubbed her back for a few minutes until she fell asleep.  And, uh, that's what I've done since.  Ferber would scold, but frankly, I think this is a fair trade-off.  And it sets a system in place for when it's time to put her down without the few minutes of nursing beforehand.


Or so I'm telling myself.  I know that we've only just begun, and that there is far worse to come, and I have NO IDEA how we're going to get through that.
Posted by Nikki Van De Car

I weaned Destiny from nursing around 15-16 months old. It started during the day by keeping her busy but I kept night nursing. Including nursing to sleep, just like you. We're also fighting the battle of her in our bed-- a big no no, I know. We're getting her to sleep in her bed and slowly getting her to stay in her bed longer and longer... I wish you the best of luck!! You've got to do what is right for you and your child!

Exactly what Lainey says - do what's right for your family.

I have all this ahead of me; right now I've got the pregnancy police to deal with, and the unwanted advice is coming from everywhere.

Good luck. It sounds like you're really working this out.

I think the most important thing is to follow your (and your baby's) hart. I had a really difficult time since I was convinced I would be able to wean my second at ten months like I did with Ophelia. Then I realized that I would just go with the (milk?) flow and relax. At 13 months she was ready. I find it was also difficult since it was saying goodbye a little.

Ah, I think you're doing really well. I'm planning on stopping day time feeds now too, but keep giving in for ease! I've also got into a real mess with bedtime, with the little Bamsegutt developing a total aversion to the cot, so I need to lie down with him until he's totally zonked before sneaking him into the cot, not ideal!! So, with all that in mind, I think a little back rubbing for Willow sounds like a great success!!!

oohh, also, note to pigsandbishops, from someone who's been there, the big thing I've learnt over this past year (after much agonising that I'm not doing the right thing on many occasions) is to just follow your instincts completely and block out all the advice. 9 times out of 10, your own instincts are the right ones. Best of luck!

You don't know me, but I just wanted to say, as a mother of twins who has been there on this one - you gotta do what is right for you and your family, but please believe me when I tell you that you will not be doing ANY permanent or even temporary damage by weaning at any time or letting her cry it out. Part of a baby's learning experience to self soothe is getting through that part of it (the crying). You seem like a really loving mom and you will do fine! Best of Luck!!

You are such a good mommy, Nikki. Looks like you've found a happy medium with the napping/nursing thing, too. She's still young and it's easier to cut the nursing back but not give it up until she's ready or until you've really had enough. I'm afraid I cut cousin #1 off too soon at about 13 months and I didn't feel good about it. On the other hand cousins #2 and #3 went up to about 18 and 24 months and I was ready. Cousin #4 nursed a little longer and little #5 said no thank you at 9 months. And that was that.
Love you!