Fattening Up The Baby Girl 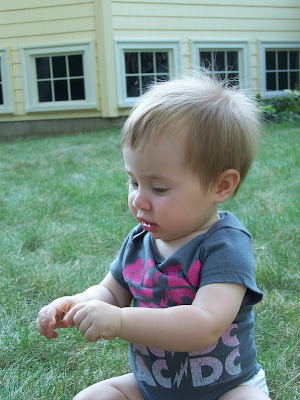 I feel like the witch in Hansel & Gretel.  I swear to you, I have not gone overboard with this, but I have tried to get Willow to eat stuff that she doesn't really want to, but is good for her.  Like spinach & yams from Smitten Kitchen.  Sigh.  Other people's babies seem to like it!  Willow finds it just barely tolerabe, but only if she's allowed to alternate bites of something yummy.  Like say brie.  At some point Willow's totally going to figure out how to crawl just so she can shove my head in the oven.

Or she would, except I have found her weakness, and she'll eat this like the witch's candy house and she's not advanced enough yet to know that she should give me a stick to feel instead of her finger.  (Also I'm not blind.)  (Have I taken this Hansel & Gretel thing too far?)

Her weakness, my friends, is carrot-apple-yogurt.  Also adapted from Smitten Kitchen, based on what I had on hand, the recipe is as follows:

Steam the apple until soft.

Simmer the remaining ingredients until the carrots are tender.  Whiz it all (apple too) in a blender/cuisinart/food grinder.

Now you could serve it just like this, and it will be eaten happily.  But if you're trying to create fatter thighs, mix it up with some whole Greek yogurt.  It tastes like some kind of exotic you-can-pretend-it's-healthy dessert, and Willow wolfed down what I thought was going to stretch out into two dinners.  (Obviously a pound of carrots makes more than two dinners, but it took me several meals to think of the yogurt addition). 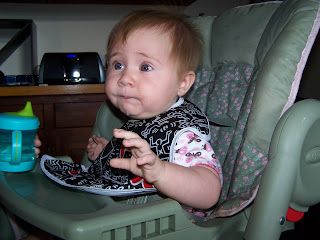 Is there more?  I'd like more please.  Right now.  I'm not kidding.

My baby is thin and I want her to be fat. I think your recipe is a way to go. Thanks!