I have had multiple people semi-laughingly suggest that I might perhaps want to put Willow on a blanket, instead of on the grass, or not let her pet a dog or cat, or they run off to wash their hands before holding her, or resist kissing her cheeks (which last is quite heroic, if you ask me).

I carry Purell, but I never use it.  Unless I get, like, poop on my hands or something.  We put her on the grass, but we do try to keep her from actually eating it.  If there's hair on her hands after Willow pets Maud, which, it being Summer and all, there generally is, I do try and wipe them off, but I don't sweat it.  For the first few months, we were super careful about hand-washing and we still, generally, try to avoid kissing her if we have colds, but other than that, we're pretty lackadaisical about the whole germ issue.

I get the sense that this attitude is a little, er, unusual.  And that some folks may consider us downright negligent.  But the thing is, Willow's immune system is the best it will ever be.  She is freaking jacked up with immunoglobulins, and it is our belief that the best thing we can do for her future immunities is to gently expose her to these demons called germs.  We will never be able to keep her in a bubble (or, you know, we could, but I would consider that negligent) so why try and fight the inevitable?  Instead, why not help her body learn to defend itself? 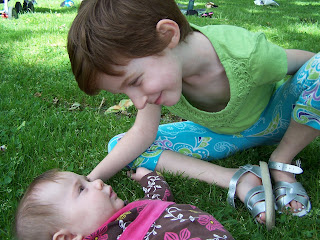 There are limits to this, obviously.  I don't let her eat her diaper, which she tries to do on a regular basis.  I don't let strangers hold her (which has been requested) or kiss her (which has also been requested) and I try to stop them from touching her hands and face (which has never been requested, it just happens).  But that's probably more about my own personal Hands Off My Baby! issues than that I think a stranger's germs are any worse than a friend's.  For I let anybody I know hold Willow, if she's up for it, and Toaster and RockNoodle are as free with her body as Dave and I are.  Cheeks that big are meant to be kissed.  RockNoodle frequently asks to accompany me on diaper changes so she can kiss Willow's little butt, which probably exposes RockNoodle to more germs than it does Willow, but that's RockNoodle's call.  I certainly can't help kissing my little squishy.

Dave and I are pretty serious about this.  Willow has never gotten sick.  Not even when I've been vomiting, not even when Toaster and RockNoodle have held her while they've been sick, not even when Dave has held after coming home on the subway (which is, you know, every day).  And obviously she will get sick one day, because everyone does, but the hope is that when she does, she'll be able to handle it. 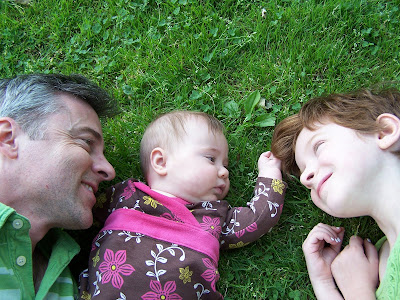 You've got a great attitude concerning germs. When Willow does finally get sick - you'll feel worse than she does.

Hmmm, usually, I agree with you 110%, but last week my little one got sick for the first time and it was scary! He ended up in ER with a fever of 39.8 deg C. Us and the doctors were afraid that if it got any higher he'd start fitting, but with paracetamol and antibiotics, he's now fine. I still try to be fairly relaxed, but I think about it much more now.

I believe that as a society, we over do it with killing germs. We survived eating dirt when we were young. I believe that building a natural immunity is better in the long run. My attitude is the same as yours!

Oh, Izzy, that sounds terrible! I'm so glad your guy is okay.

It is really easy for me to be all blase about this when Willow's never been sick. She had a reaction to a vaccine once, and that was bad enough--I can't imagine going to the ER!