I don't know if I've made this sufficiently clear, but I don't much care for being pregnant.

The thing is, I really thought I would. I've always been fascinated by stories other women tell about their pregnancies. Cravings, feeling the baby move--and I love the way pregnant bodies look. 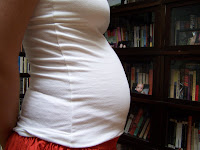 And all of that is still true--I love feeling Roo move, even in the middle of the night when I'm trying to get back to sleep (although perhaps less so then than at other times). And I find the craving thing (mild as my case may be) pretty amusing--yay carbs! All I want is cornbread! And I do spend an inordinate amount of time examining my belly in the mirror. It looks pretty cool.

But that's all. It looks cool. It doesn't feel cool. In fact, when I'm trying to tie my shoes in the morning, it feels just about the opposite of cool. I don't like a single thing about the way I feel. My body hurts pretty much all the time, and sometimes I think it's just messing with me to be mean. Last night, for example, just as I'm breaking through the six-month-ribbon, I threw up, which I still do occasionally, for no predictable reason whatsoever. The Pregnancy Demon just wants to make sure I know that I'm still in its power. Mwah freaking hah hah.

All right. Almost there. 2/3 of the way, if you lie to yourself and go along with the whole pregnancy-is-nine-months-long thing, which it SO ISN'T but let's pretend it is for now. Which makes this September, which makes it finally kinda sorta (okay, not really, because my body temp is higher than usual, but at least I could put it on for the two minutes it took to take these photos) cool enough to wear February Lady Sweater: 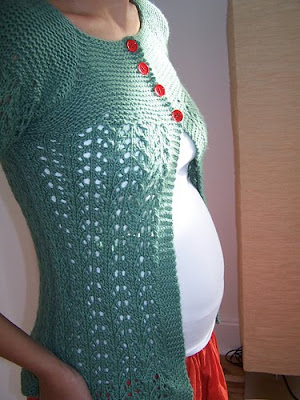 I am supremely proud of my fudging abilities. Knit with Size 10 needles and only 3 skeins of Malabrigo Worsted, I made this whole sweater and had just over two yards to spare. I cast on a few stitches less than for the smallest size, and just stretched everything as far as it could go. And blocked the hell out of it. 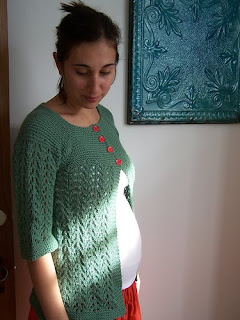 I ended up having to knit the sleeves back and forth, so I could work them at the same time and use up as much yarn as I could, making sure they were as long as could be without running out of yarn. That, by the way, was a pain in the ass, as the yarn would inevitably get tangled and twisted, but it got the job done, and I think I would have had to knit and reknit and reknit again if I hadn't done it that way.

It's a very comfy sweater (far as I could tell from the five minutes I wore it) and falls somewhere between fun and elegant, though bright orange buttons might push it farther over into fun than it might have been otherwise.
Posted by Nikki Van De Car

The sweater looks great! And so does the belly!

(Wordver switched as the page was loading: Started out as a bold "FAKER". Now it says "gleam" in nicer font.)

Thank you for being so honest about not loving pregnancy! I just found your blog (googled "expecting knitter") and love it, and man, is it nice to see that not everyone has an awesome time.

Love the knits. Your baby is beautiful!