Generally speaking, I don't blog or ravel about knitting that's been commissioned. Sometimes it just isn't something I would otherwise knit, or it isn't to my taste, whatever. And either way, it doesn't really feel like mine--gifts are one thing, but something that somebody's paying me to make, well, that was theirs from its conception. And so writing about it feels somehow dishonest--yeah, I made that, but not really.

However. This one project I just find so ridiculously funny that I can't quite help myself.

Sterling, the aged founder of my company, who wears honest-to-goodness straw fedoras in the summer and mink Russian-style hats in the winter, asked that I knit him a tie. The conversation went like this:

Sterling: Good morning, Nikki. I have a business proposition for you.
Nikki: (clicking away from solitaire and trying to appear businesslike) Good morning. What can I do for you?
Sterling: I believe I would like a tie. A knit tie. I believe this is something you could do for me, and about how much would you charge?
Nikki: (preparing to give standard speech about time and materials) Well, it depends on the kind of yarn, which can be very expensive.
Sterling: Indeed?
Nikki: Well, one might want a tie in wool, cotton, silk...
Sterling: Oh, I believe I'd like silk.
Nikki: I thought you might.

It took some time to settle on a pattern. For one thing, I had to convince him that he really, really wanted a plain garter stitch tie with no liner, because I can't sew. Attaching the liner would just be beyond me. I pulled up a Brooks Brothers tie, which Sterling found relatively acceptable (Brooks Brothers is just so passe, but then these aren't handknit), and after some wrangling, we determined that some variation on this would do.

I trooped off to Purl and bought me some Tilli Thomas Plie. Because obviously nothing less than the best would do (although frankly I found it a tragedy in black. The black does not glimmer as the other colors do). 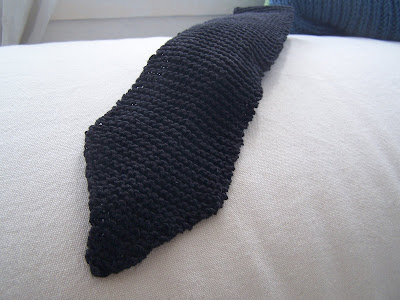 I cribbed off of Easy and Elegant Garter Stitch Tie, from 101 Designer One-Skein Wonders. But, as you can see, Sterling insisted on a traditional pointy tie, though I've never seen a knit tie (in person, anyway, I did find some patterns) that didn't have a flat edge. It was easy-peasy and boring as hell, and the thrill of knitting with Tilli Thomas wore off quickly as I discovered that the yarn was dyeing my fingers, leaving nice little black stripes where I hold the yarn (apparently I'm insanely consistent. Those stripes were the exact width of the yarn), and dyeing my needles to boot. My fingers washed off, but I fear the tips of my size 4 birches will never be the same again.

But the thing really is, I just knit a tie. A silk tie. Something I vowed I would never do, because I honestly couldn't fathom for whom I would make such a thing (obviously I didn't really put much thought into that).

Commissioned knitting. It takes you into far-flung lands, the likes of which you would never have seen otherwise.
Posted by Nikki Van De Car