Hey! Guess what! I stayed for the whole show, and went to bed long after midnight, and here I am at work and somewhat functional! I'm a grownup still! Who knew? Course, I had to pound a diet coke (gasp!) in order to make it, but make it I did.

We had amazing seats. We were stunned. We had no idea where we'd be sitting--a friend hooked us up--so we showed up, and....hey. We're in the third row. Cellphone pictures actually look like something from here. Neato. 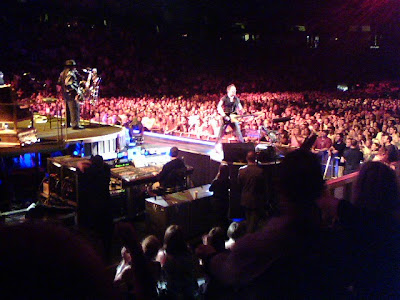 We were, on the other hand, waaaaaay on the side, so the sound left a little to be desired (ended up sounding like we were seeing Springsteen at Maxwell's), and while we had great views of Clarence (become more and more like James Brown with each passing year) and the Charlie Chaplin of guitarists, Nils Lofgren--and Bruce certainly bounded around the stage enough for everybody to get a good look at him--we didn't see much of Steve Van Zandt. Which is sad, because he can just stand there and he'll crack me up, but I have to say that watching Nils was probably more impressive. Also had a pretty good view of Jay Weinberg, who was taking over for his dad. Kid was pretty good--only eighteen years old, and did a great job on some songs, and a manageable job on others.

I think had it been anybody else, we probably would've skipped the show, given how tired I've been lately. But it was Bruce, and it was wonderful, and more than that, it proved to me that I can and will go out and have a good time and be pregnant all at the same time. And if there was ever an ideal first concert for Roo, this would be it.
Posted by Nikki Van De Car

BRAT!!!!! I always wanted to see him in concert. Well, I'm glad you had a great time.