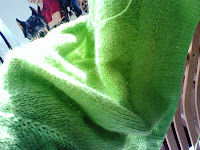 So I've been working on a new design. I have a huge skein of gorgeous sportweight alpaca, hand-dyed about six months ago, and a burning need for a cute cardigan to wear in the spring. There is certainly no shortage of cute cardigan patterns out there, but I had something very specific in mind and wanted to see if I could achieve it.

The short answer is no. I couldn't.

I wanted to incorporate linen stitch into a bell-waisted and bell-sleeved mini-cardi. I worked the neckline several hundred times, finally found something I was satisfied with, worked on down, increased for the bell, knit the linen stitch, which took forever, bound off, and discovered that the bell had vanished. In fact it had inverted. Linen stitch has all the stretch of a block of wood, and it sucked up my increases (which were many) and vanished them into its slipped-stitch vortex.

I was ready to burn it. I know that this is just the thing that comes with the territory of designing, but my patience had been tried and I now hate this cardigan.

My friend Mary doesn't. She saw me trying it on, cursing it, and picked it up off the ground before I could stomp on it. She tried it on, and I realized--it looked good. It didn't look anything at all like what I had in mind, but it looked good.

I was still too angry at it to want it, but Mary does. We worked out a deal: if she would help me design it to her vision (since mine was clearly a no-go), it was all hers. The question of whether I can execute her ideas any better than my own remains, but I think we can do it.

If not, I'll stomp away.
Posted by Nikki Van De Car