In shopping around knitpicks for yarn for Kim Hargreaves' Emily, I found myself, as usual, drawn only to the blues. The problem is that I wear jeans. A lot. And I thought Emily would look nice with jeans. But I have a lot of blue sweaters, and the thing that I have noticed is that if you wear a blue sweater with blue jeans that's a whole lot of blue going on.

So I tried other colors. But the pinks didn't look right and the greens didn't seem right either (somehow I decided I have enough green clothes, but I don't think I do actually) and somehow it seems that those are the only colors I like. Yellow=blech. Ditto orange and many reds (I'm very picky about my reds). And then I came across purple. 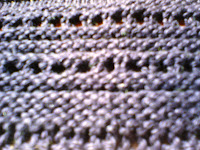 I do not, generally speaking, care for purple. I don't think I own more than one item of clothing that is purple, and that dress is really more along the magenta-purple lines. But, looking at Comfy, there was a dark purple, a Blurple. (They call it "blackberry." Boring).

Of course, that cellphone picture there does not capture the color at all--it does not shine like that, it absorbs all light into its murky depths.

I know, by the way, that my yarn choice is something of a head-scratcher, given that it's much bulkier than what is normally called for for Emily. But many of the sweaters I looked at on Ravelry seemed overly drapey--I wanted to see if I could make this pouf. I've gone down a needle size as well--six from what was supposed to be seven. Which may be pushing things. We'll see.
Posted by Nikki Van De Car