Warning: The following will be a whiny, self-pitying rant. Actually, two of them.

Rant the first: I hurt. I hurt everywhere--in my shoulders, in my wrists, IN MY KNEE, in my other knee, in my thighs, in my feet. I'll go one day and be mostly fine, and the next day I will hurt. And now I've started up with some lovely twitches. And every single one of my joints creaks and scrapes like I have arthritis. Which makes me nauseous. And is an unpleasant preview to my elderly future. My office's in-house expert on being elderly has taken an interest in my injury, partly I think because he's glad that there is somebody here who actually moves more slowly than he does, and is offering me much helpful advice along the lines of physical therapy and salves. Lovely.

Rant the Second: The knitting. It's just not working for me. And I sure have been doing a lot of it, with the being chair-bound and all.

I've finally finished Faith, and I think it's going to be great, but by God it took a long time, and now it's just sitting there waiting for me to get some buttons for it, and I can't because I can't get over to M&J Trimming, and so it lies in a neatly folded pile mocking me. Anyway, I can't really wear it properly because only crappy baggy pants fit over my brace and so I just feel slobby and I'm getting stress pimples and Faith is too good for those.

Other than that, I just haven't been happy with anything. I tried inventing a kind of smocky-pulloverish thing, and got most of the way through before I decided I didn't like it. I stared at my not-worn-in-the-last-year Belle Epoque, in disgust that such a pretty thing has grown and sagged and rolled and become incredibly ugly (there are times when I'm not so sure alpaca is as true a friend to me as I am to it) started to unravel it in an attempt to be all recycling and virtuous, and then thought with despair that any other sweater I made from it would suffer the same fate, and stopped unravelling. It sits in a lump. (It may one day become Gathered Pullover, but I need to get over my despair first). I've gone through my stash and insisted that surely with all this nice yarn I can make something nice. 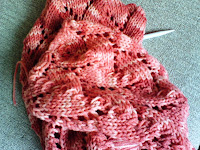 The first is worked in Malabrigo Worsted, and if that doesn't count as nice yarn, I don't know what does. Usually knitting with such scrumptious yarn blows all cares away, but I suppose this week is a special case. The vest itself is fun, and fast (and works my cables both needled and otherwise), and you really do have to appreciate a pattern where the finishing takes longer than the knitting. But I fear that, as has been my habit lately, my gauge is off, and the vest will be too small. And anyway I can't tell really because I can't go buy toggles at aforementioned M&J trimming and life just isn't fair.

The scarf is being knit in an attempt to be matchy, and it seemed like the leaf motif would make a nice pairing with Verity, and the yarn (Sliver Moon Farms merino worsted) is nice and loosely yarny if not what I would call scrumptious, and I think I'm going to felt it slightly--won't that work well? You know, if I don't screw it up?--and it too is flying but see the problem is that then it too will be done and I'll be back staring at the stash with only unhappy knitting in my future. And that's just wrong.

I apologize for both the whining and the excessive ravlinking. I'll be better tomorrow.
Posted by Nikki Van De Car