This morning, to me, before I've even had coffee, Dave said to me, "You look really tired."

On the other hand, the Christmas knitting is, dare I say it? Done. (Except for the sewing up of Cobblestone, of course). It was a long slog (it was! I started back in September!) and boy oh boy did I knit a lot of cowls, but I'm finished. No more, I tell you.

The latest additions include: 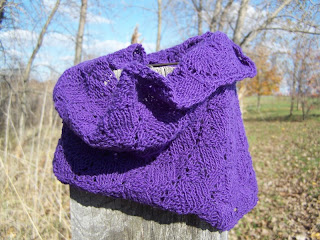 Abby, knit with More- house Farms Premium Merino, in what can only be described as Very Purple Indeed.

This was a fun and delicate knit, and given the sweater-heavy time of year, it was nice to be knitting with such fine yarn, breakable though it is.

I also finished my sister's Bruised Monkey, which I almost want to keep for myself! 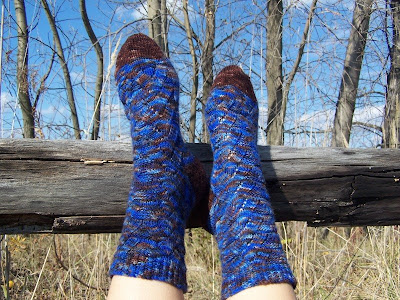 I wasn't very happy with the colorway when I dyed it, and I would still like to try again to get a 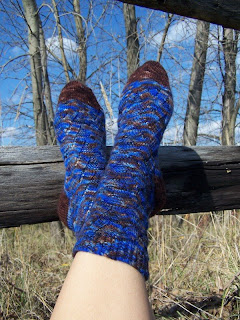 lighter blue in there, but the mixture of blues and browns is nicely balanced, and the brown toe
and heel yardage worked out perfectly (though I changed to a short-row heel just in case).

I don't think I'm quite as delighted with the knitting of Monkey as everybody else in the world, but they do make for very attractive and comfy socks.

And, producing squeals of excitement when it arrived, I finally got my hands on the at one time very difficult to get ahold of Sweet Georgia Superwash Sock--in Slayer. Stitchywitch had a couple of skeins lying around that she decided she didn't want anymore--and despite having just declared a moratorium on yarn buying, well....this was Sweet Georgia Slayer, which clearly I need to own, it is my destiny, to every generation there is born somebody who needs to own a pair of socks knit with Sweet Georgia Slayer and I am she. 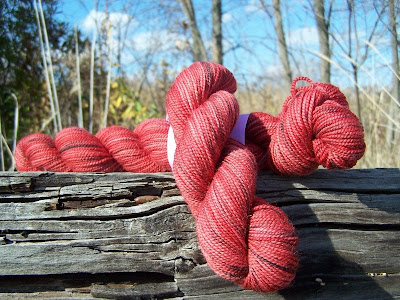 And so mote it be.

Photos, by the way, were taken in Liberty State Park, and not on a farm, though I love the farm-like fence posts. Especially when they're draped with knitting. 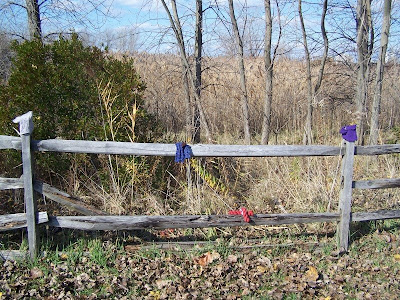