I have much knitting in a state of nearly finished: Luna will block tonight, I made a Dolores Park Cowl with the leftover malabrigo (for Grandma? Or Puanani? I haven't decided), I'm nearly done with a potato chip scarf for RockNoodle, Clapotis for Mom has just begun, but her Fetchings are just about finished, Cobblestone is languishing due to all this activity (and due to me having trouble deciding if the very tiny mistake is not so tiny after all), but mmm, that's progress, yes. I'm a knitting fiend. Of course, it helps that I'm using really large needles for most of these.

I've done other stuff too, though! Dave and I have been watching a lot of Pushing Daisies, and honestly, I don't think you can watch that show and not want to make a pie. It's just not possible. So on Saturday, we made an apple pie, and duly inspired by Chuck, we grated some gruyere on top of the crust. It was heavenly. Absolutely, hands down, the best apple pie I've ever made, and possibly ever had. There was both butter and shortening in the crust, and we cooked down the apples in the bacon-flavored cast iron pan before popping it in the oven, and that combined with the gruyere gave it just the right amount of salty not-too-sweet tang.

We also--and this may have been ambitious of us--made gnocchi. I used Heidi Swanson's recipe, and made sure that we had some regular pasta on hand just in case things went awry.

In the end, the gnocchi did not fall apart in the pot, the kids loved it, and Dave and I concluded we need a ricer.

Buffy: Ok. You know what? We need to boil those and put them through the ricer.
Giles: I don't think I have a ricer.
BuffyYou don't have a ricer? What do you mean? How could someone not have a ricer?
Giles: Well, do you have one at home?
Buffy: I don't know. What's a ricer?
Giles:We'll mash them with forks, much like the pilgrims must have.

Normally, I'd agree with Giles, in that having a thing that has only one use is insane, and honestly how often are we going to make gnocchi? But if you're going to do something do it right and I could not oh my God get all the lumps out of those potatoes. Maybe if I had an hour or two or three. And a larger cutting board. And lumpy gnocchi? Not so much.

I'd post pictures, only I spent most of the day covered in flour which is not good for one's camera.

Instead, I'll post a picture of some awesomeness we saw on the side of a building in Jersey City: 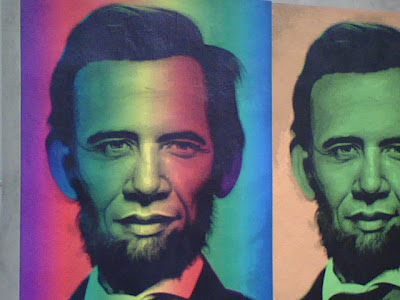