It Takes a Lot of Steps

So the dyeing didn't go too terribly after all. There was a moment of panic (fueled by stupidity) when I realized I'd completely forgotten to buy mason jars, and tried to figure out if I could possibly handpaint a 300 foot long skein.

Answer: God no. Mercifully, Regina loaned me her supplies. 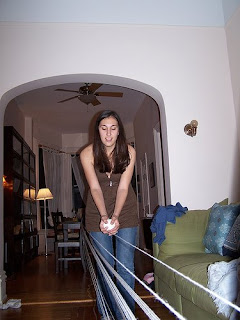 But that skein? It was long. Dave was highly amused (Maud was highly terrified, which was amusing) and took about 500 bajillion pictures and a video, most of which I will spare you.

Round and round I went. I felt a little self-conscious, and more than a little idiotic, I gotta tell you.

Such was my mistake. I'm not entirely sure how to rectify it in the future (tie less tightly? But then my markers will move. Maybe I should raid the kids' Crayola box) but everywhere I tied, the dye didn't take as strongly. 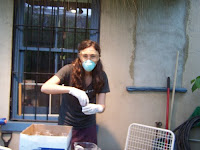 Although I gotta say, mixing up the dyes was interesting. As expected, there was no break in the rain, and so there I was, in a freaking thunderstorm, working on a metal table with noxious chemicals. 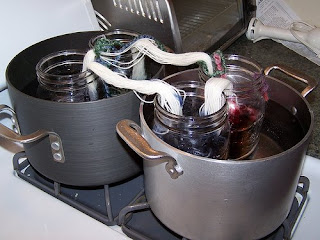 The Incredibly Long Skein was dipped into jars and left there to simmer for about a half an hour. My brain told me not to let it quite boil, but I don't know why. Consensus is I'd have been a lot less stressed if I'd had a book handy. Nobody on the internet (that I came across, anyway) seems to dip dye with Jacquard.

And then I tried something I already knew. Sort of. I handpainted a Normal Sized Skein. Again, a book would've been handy. Regina showed me how to do this a couple of weeks ago, but I (a) didn't have enough space on the kitchen counters and really should've cleared off the table but didn't, (b) was overwhelming hot because it was 85 degrees out AND we were roasting a pork belly for four hours, and (c) was putting bizarre amounts of pressure on the success of my Day of Dyeing and that never goes well. 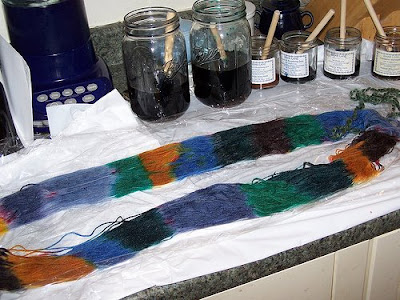 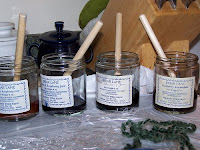 Looking at this now, I'm not sure why I thought it was such a dismal failure, but there you are. I did.

And this despite the fact that I was using these beautiful little jam jars from The Jam Lady in Wellfleet. Clearly that should produce perfection.

Well, maybe not quite. I didn't have the space to roll my Saran Wrap donut tight enough, and a little dye leaked out, and so I was convinced that everything had bled and I was going to get Cape Cod Brown socks. 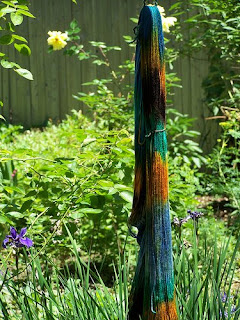 Mmmm, not so much. The grey looked more blue than grey (I was trying to make it very pale. Oops) but I think it's as representative of the Cape Cod I personally know and love. And I have just the pattern in mind--Horseshoe Crab Socks. How awesome is that? 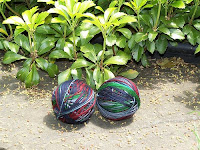 It's hard to know how the British Sea Power socks will have worked out until they're knit up--which, unfortunately won't be for a while. I have to knit Baudelaire to teach myself how to knit another toe-up heel because let's face it, short row is getting boring.

I'd also like to knit some things besides socks, but it's hard when I keep dyeing all this sock yarn and then am dying to know how it'll look....

But in the meantime, I can just admire it. 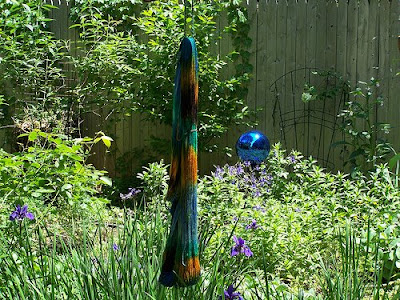 Email ThisBlogThis!Share to TwitterShare to FacebookShare to Pinterest
Labels: dyeing