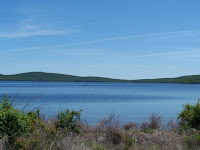 Like all good horror stories, the scene starts out fun and idyllic. A family backpacking in the woods of New Jersey, telling stories and singing Kumbaya (really. Except RockNoodle didn't know the song, and so was not quite in the holding-hands-in-joy spirit).

Dave attempted to prepare the camera for a group before-we-set-out shot, and so this is the shot that always accompanies such preparations: 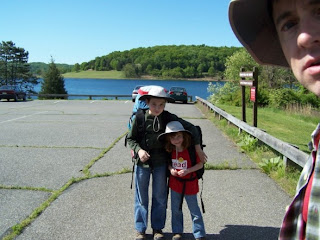 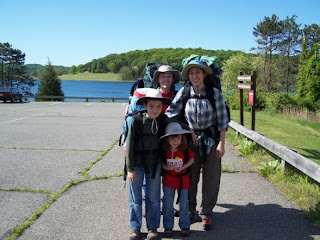 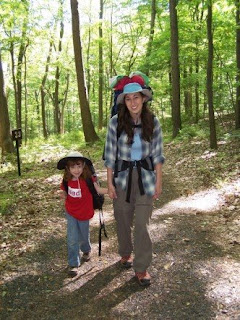 We hiked the 5.5 miles to our campsite--the longest Toaster and RockNoodle have ever hiked, AND RockNoodle carried her pack almost the entire way, AND Toaster was carrying their tent for the first time. Very. Impressive.

They celebrated their success by tormenting turtles that had snuggled together in a little love nest by the lake. 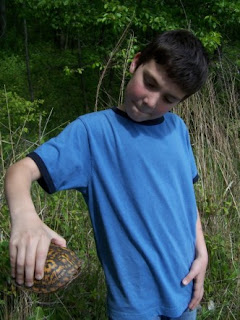 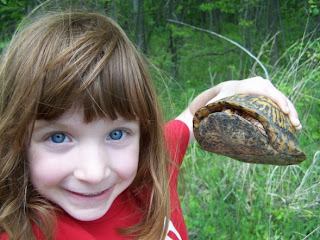 I was not a part of this. I hold Dave fully responsible. I was napping. And knitting.
Obligatory camping & knitting photo: 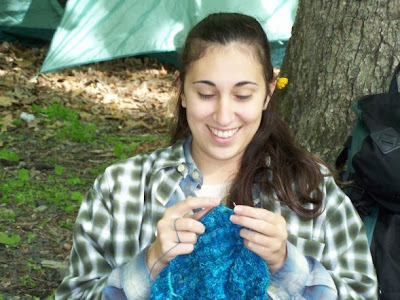 The hike back was a bit easier--less to carry, as always, and we all had enough breath left to discuss the varying kinds of love depicted in Enchanted--real, human love (Robert & Giselle), fantasy love (Edward & Nancy), attempted love (Robert & Nancy), and fake love (Edward & Giselle). It was a very serious and thoughtful conversation, peppered only rarely by calls of aaaaah-aaaaaha-aaaahahaaa!--which were, of course, answered lovingly by all the birds and chipmunks of the forest. 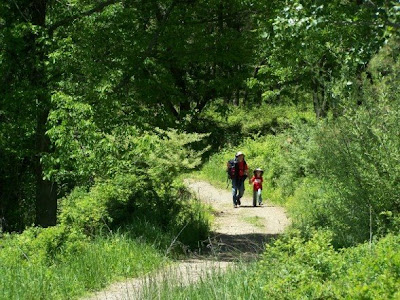 RockNoodle looks quite jaunty there as she marches along. Note who is carrying her pack: 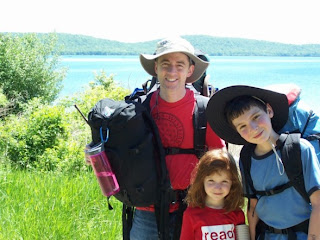 Ah. That explains it. But, even so, for the end of an 11-mile trip, we still look cheery and happy enough. And we were--we chattered and sang on the drive home, and complained good-naturedly about our sore feet, and discussed with great interest what we should eat for lunch, who got to shower first, and how many root beers such hard-working children were entitled to.

But when we got home, the metaphorical skies began to darken. RockNoodle's "read" shirt was stripped off her to reveal...a tick burrowed in her armpit.

Now, this may not sound too terrible to those of you who are used to this sort of thing, but here are some factors to keep in mind:
1) RockNoodle is six, small, and bug-phobic.
2) Nikki is tick-phobic.
3) Toaster is easily upset by anything that upsets his sister.
4) Dave is extremely protective of his children.

Dave and I both managed to stay calm. The same cannot quite be said for the children. Actually, Toaster did fine--he hovered outside the bathroom door clutching Dave's beer and asking how he could help. Dave tried to convince himself that holding a match to his daughter's skin was really the best solution, and I held my arms around RockNoodle and said soothing things and told her to squeeze my hand. RockNoodle sobbed.

The tick did release her, and Dave killed it dead. RockNoodle continued to sob. I ushered Dave and Toaster upstairs to make some waffles and drink their beer and root beer respectively. And then I took a shower with RockNoodle, so that I could inspect every earthly inch of her. I calmed her down by talking about worst case scenarios with her--we spotted the tick so even if it is carrying lyme disease, we caught it in time, and so you just take some medicine. No big deal. And I told her that I'd had a tick in an even worse place--that a few years ago, one had crawled into my pants and near my crotch. (This may be the source of my tick-phobia).

Mind you, RockNoodle is a curious and precise little girl, and so wanted to know exactly where the tick had been, and I showed her. She was properly horrified, and felt much better about her own predicament. We went upstairs, sugared up them kids with soda and maple syrup, and danced to Fleetwood Mac, and sent them home to their mother clean and tick- and tear-free.

But then Dave and I did our own tick-check. And Dave had one in his armpit. I was able to remain calm for RockNoodle, but I couldn't quite manage it for Dave. He had to trim his armpits, as lighting one's armpit hair on fire seemed like a bad idea. My stomach turned as I pulled out the wriggling little bastard. Dave squished it while I did a little panic dance.

We all know what comes next, right? It's just so obvious.

I too had a tick. In my pubic hair. Right where RockNoodle had been looking. And this time it had burrowed. This time there was no panic dance--there was catatonia. I was all for lighting myself on fire--just get the thing out of me! All the calming things I said to RockNoodle flew right out the window--there was A TICK. IN MY PUBIC HAIR. AGAIN.

Yeah. Okay. My hands are shaking again, and it's been days now.
Posted by Nikki Van De Car

I think it's time you all got completely waxed. Though Noodle may not actually have hair anywhere except her head. I guess that makes it less painful for her than for you guys.